Sonu Sood recently took to his official social media handle and posted a video to educate people on the new ways of greeting and meeting. Read more.

Sonu Sood has asked his fans and followers to avoid handshakes and instead follow the traditional means of greeting. In a video that Sood posted on his social media handle, he talked about how it is better to use a "Salam" or a "Namaste" to greet each other instead of a handshake. Read on to know more about the story:

In a video that Sonu Sood posted on his social media handle, fans and followers can see that the actor is giving tips for Unlock 1.0. In the video, Sood talks about how we should change the ways of a traditional handshake. He then asks fans to maintain distance and with a big smile greet people with "Salam-Namaste". In the video, he also said YOLO, which means you only live once. He captioned the video post saying, "Aaj kal salam-namaste karne main hi swag hai." Here is the video post:

The video went on to garner over one lakh likes within 30 minutes of its upload. Fans of the actor took to their social media handle and posted comments with hearts and praises for his efforts towards the society. Fans and followers are also commenting on the photo saying that he is the "real" hero. Here are a few comments on Sonu Sood's video post: 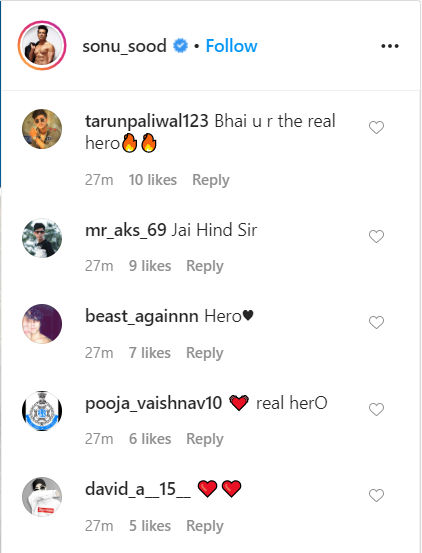 Sonu Sood has been going out of his way to help the migrants who are stuck in Mumbai. He has been arranging busses for them so that they can travel back to their home towns. The actor has also said that if anyone is stuck in a problem due to the lockdown, they can reach him through his Twitter handle. Along with Sood, Manish Paul, Remo D'Souza, Salman Khan, Akshay Kumar, and others have been coming forward to help the society.

It has been reported that actor Akshay Kumar has donated PPE marks and kits, over 1000 wrist bands to Mumbai Police, and huge sums on money for COVID-19 relief funds. Vidya Balan has also donated huge sums of money that she had raised and also donated PPE kits to a hospital. John Abraham, on the other hand, is extending his humane efforts towards stray animals and has been feeding them along with the help of several NGOs dedicated to the cause.