Sridevi to Amitabh Bachchan: American photographer Steve McCurry recently shared a set of photographs that is a sight for the sore eyes. See the pics here.

American photographer Steve McCurry recently shared a set of photographs that are a sight for the sore eyes. He went on to treat his fans with some most exquisite pictures from the Hindi film industry ranging from late legendary actor Sridevi to another legendary actor Dev Anand. These pictures are sure to bring a smile on your face.

Steve McCurry recently shared a bunch of pictures on his Instagram handle where he went on to showcase some of the Bollywood’s unseen pictures that are unmissable. In the first picture, one can see Sridevi checking her makeup while Anil Kapoor is carrying her on his shoulder. This shot was captured in the year 1993. In the second picture, one can see Dev Anand rehearsing for a fight scene. This picture was captured in the year 1993.

In the fifth image, one can see Amitabh Bachchan striking a stunning pose. This picture was captured in the year 2010. Check out the stunning pictures below.

Seeing these lovely pictures, fans went on to praise Steve McCurry for his great photography skills. Seems like fans were thrilled to watch these pictures. One of his fans said, “It is a delight to see these images. Our Bollywood personalities captured by you”. While the other one said, “Leonardo Da Vinci wrote: Details make perfection and perfection is not a detail. And these photos, Sir, are perfect in every detail...” Check out some more comments on this post. 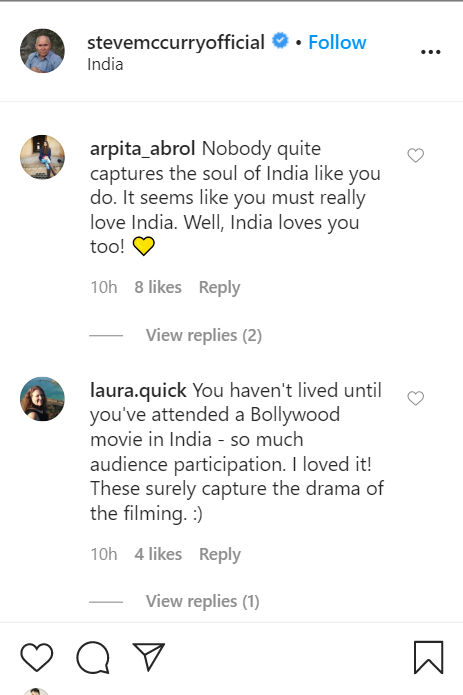 Also read | Unseen Pic Of The Day: Baby Sridevi's Sepia-toned Pic With Her Parents Is All Things Love