Late actress Sridevi is a timeless beauty and her recent picture in a Manish Malhotra gown proves the same. Check out an unseen BTS picture of the actress.

Late actress Sridevi was a muse for many designers,  including Manish Malhotra. Throughout her life, Sridevi has been the style queen, with several covers to her name. The actress has been loved by the designers and one such proof is Manish Malhotra’s latest update. He posted her picture from one of his shoots in the past with the actress. Sridevi looks ethereal in the picture as per her fans.

In the picture that Manish Malhotra shared on his Instagram account, one can see Sridevi dressed in one of his outfits. She looks beautiful in the gown as per her fans’ comments. Sridevi is wearing a huge lavender, purple, sparkling, Manish Malhotra piece. The outfit was styled with big hair and also diamond bracelets. Sridevi is holding a giant bouquet of purple flowers which is almost covering her upper body. Sridevi is all smiles while looking at the camera in this picture.

Manish Malhotra shared the picture on his Instagram and also shared some beautiful words for the late actress. He penned, “#throwback .. My @vogueindia 2005 year cover shoot and story on my 25-year work journey would absolutely be incomplete without Her .. I truly miss my dearest Incredible and Supreme Sridevi and I think of her so very often .. love and just lots of love for her .. #memories #flashback #memoriesforlife.” The picture received moving reactions from the fans of the actress. One fan wrote, “I think of her too. Her death hit me and those of my generation very hard. You are truly blessed to have known her.” Another fan simply couldn’t let go of the actress’s memories as the fan wrote. “Can u pls share more about her like what she liked and what she talked and much more .... big fan of her.” 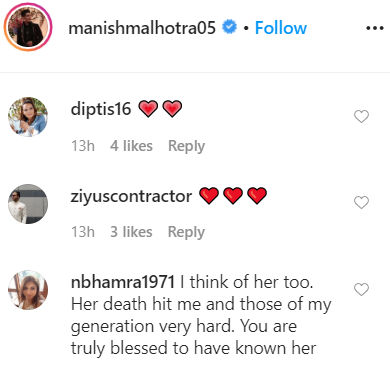 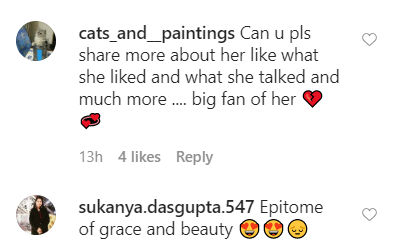 Also Read | Do You Know Ramayan's Arun Govil Has Also Worked With Sridevi In A Bollywood Film? Details