Aarya actor Sushmita Sen took to Instagram on Monday, January 04, 2021, to express her happiness about her daughter Renee making her debut with a short film.

Aarya actor Sushmita Sen took to Instagram on Monday, January 04, 2021, to express her happiness about her daughter Renee making her debut with a short film. The actor went on to share a post of the actor’s interview and also penned a sweet and happy note revealing her excitement on the same. On seeing this post, fans could not stop themselves from sharing several congratulatory wishes and notes.

Taking to her Instagram handle, Sushmita Sen re-shared a picture of her daughter Renee Sen which was first shared by HT Brunch. In the picture, the actor can be seen all smiles for the camera. Renee donned a red top and blue jeans. She completed her look with a wavy hairdo and minimal makeup. In the picture, one can also read, “a star kid is unborn”.

Along with the picture, Sushmita penned a happy note revealing details about the same. She wrote, “Sooooo Sooooooo Proud of you Renee Shona!!! ðŸ‘ðŸ¤—ðŸ˜‡â¤ï¸ðŸ’ƒðŸ»Big Dreams & little steps...A self-made story in the making!! ðŸ‘ŠðŸ˜ All our love & blessings always @reneesen47 #duggadugga ðŸ˜Š Maa, Alisah @rohmanshawl”. Take a look at the post below.

As soon as the actor shared the post, fans could not stop themselves from commenting on all things nice. The post went on to receive likes and happy comments from netizens. Some of the users went on to congratulate Renee, while some went on to pen some sweet messages and notes. One of the users wrote, “Its called .....having a spineðŸ˜‡ðŸ’œ....best of luck girl”. While the other one wrote, “Sooooo proud of you sweetheart”. Check out a few comments below. 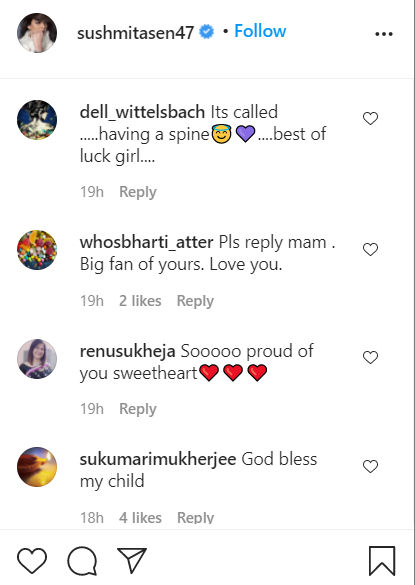 Sushmita Sen's older daughter, Renee Sen, will make her acting debut with a short film titled Suttabaazi. The short film tells the story of the middle-class family and stars Renee Sen in the role of Diya Mehta, the daughter of the house. In the short film, Renee plays the role of a clandestine smoker. The first look poster gives an amazing glimpse of Renee’s relationship with her mother– essayed by Komal Chhabria. Renee can be seen donning a salmon pink top and a beige skirt. The short film is reported to release on January 10, 2021.