Sonam Kapoor's Veere Di Wedding co-actor, Swara Bhasker,shared a series of pictures on her social media to wish the beautiful couple on the special day.

Sonam Kapoor and Anand Ahuja are celebrating their second anniversary on May 8, 2020. Though the two are quarantined in their Delhi residence, they received blessings and wishes from their friends back in Mumbai. Sonam's Veere Di Wedding co-actor, Swara Bhasker, shared a series of pictures and video on her social media to wish the beautiful couple on the special day.

Swara who was one of the bridesmaids during Sonam's wedding treated fans with several throwback pictures from the memory. In one of the pictures, Sonam can be seen in conversation with her hubby Anand during a wedding ritual. The actress captioned the picture on her Instagram story as, "Wishing endless years of togetherness to our favorite couple."

Another picture is also from the wedding day where Sonam is looking ethereal in her wedding lehenga while Swara can be seen striking a pose with the bride. The third picture is from the sangeet night where Swara and Anand can be seen kissing Sonam in the center. At last, Swara shared a video where she can be seen presenting a special dance number on the peppy track Swag Se Swagat along with the other guests. While wishing the couple, she also mentioned in the caption that she broke her back at the end of Sonam's wedding and was bedridden for a week.

Read: This Day That Year: When Sonam Kapoor Tried To Drop 'Kaleera' On Janhvi Kapoor 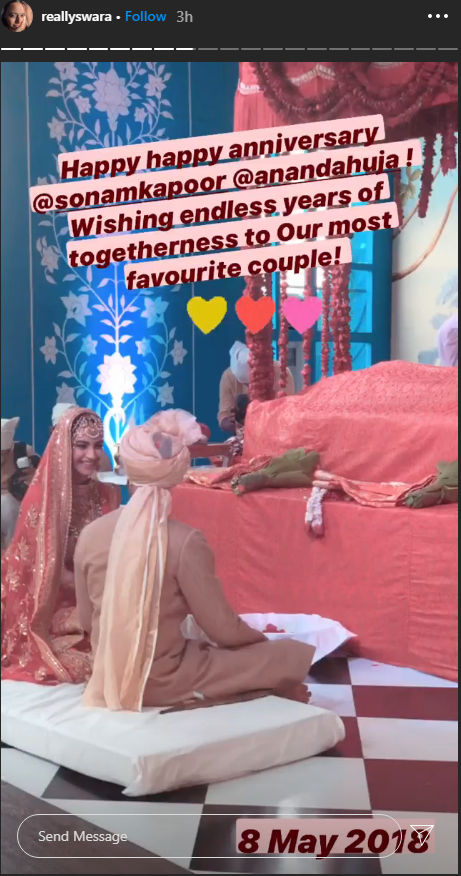 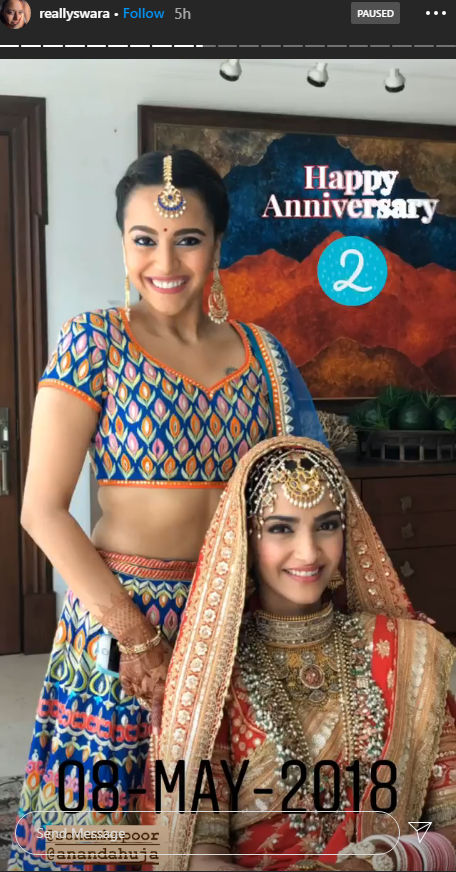 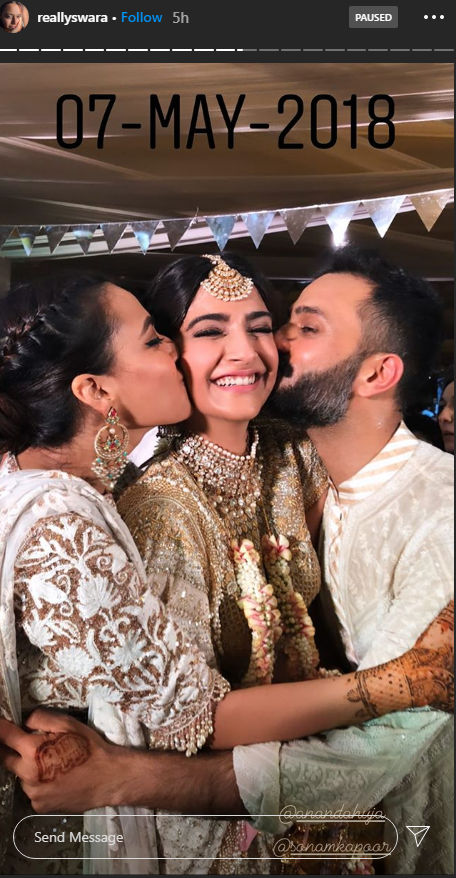 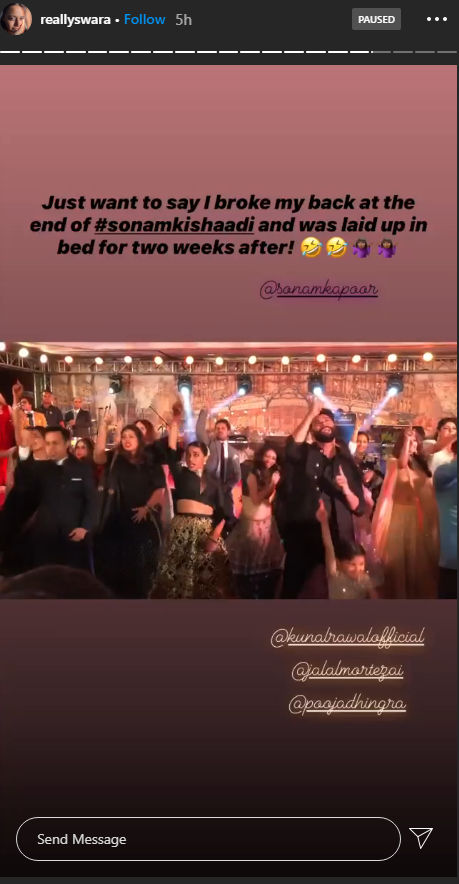 Apart from Swara, Sonam also received beautiful wishes from her parents on the joyous occasion. Sonam's mother Sunita who misses her daughter, shared several throwback pictures to commemorate the day. The first photo sees the duo decked up for one of their shoots, while the next pic probably is clicked while they enjoyed their wedding festivities. Sunita Kapoor penned down a heart-warming caption for the post. It read, "Happy happy anniversary to my darling Sonam and Anand ..May you always be blessed and surrounded by all the love and happiness. We love you so much and miss you so much."

Read: Sonam Kapoor Shares Her ‘inspiration’ As She Celebrates Anniversary With Anand Ahuja

While Anil Kapoor took a unique turn and shared an adorable video to bless the couple. The video is an amalgamation of all the beautiful moments that Sonam and Anand had spent during their wedding ceremonies. The clip opens up with Sonam kissing her husband during one of the ceremonies followed by a beautiful couple dance which just stole the entire show. The video also shows Sonam dressing as a bride, looking all excited for the big day. Anand seems to grab eyeballs with his royal look as he simply dresses up like a prince charming. Later in the video, the couple can be seen exchanging vows while they start their beautiful beginnings.