As Bollywood's one of the dashing star5, Vicky Kaushak turned a year older, scores of his friends from the industry flocked the social media with their wishes.

As Bollywood actor Vicky Kaushal turned a year older, scores of his friends from the industry flocked the social media with their wishes. Vicky's Manmarziyan co-star Taapsee Pannu shared a still from the film to commemorate the special day. While sharing the adorable snap, she also mentioned that the picture is one of the favorite pics of the two stars together.

The Pink actress took to her Instagram story and shared a still from their film Manmarziyan where a cheerful Taapsee can be sitting on the lap of Vicky. Calling the birthday boy as "neele Kukkad," Taapsee captioned the picture as "Happy Birthday mere neele kukkad. Stay the boring black and white you are. Always."  She also wrote that this picture is "still one of the favorite pic of ours!" 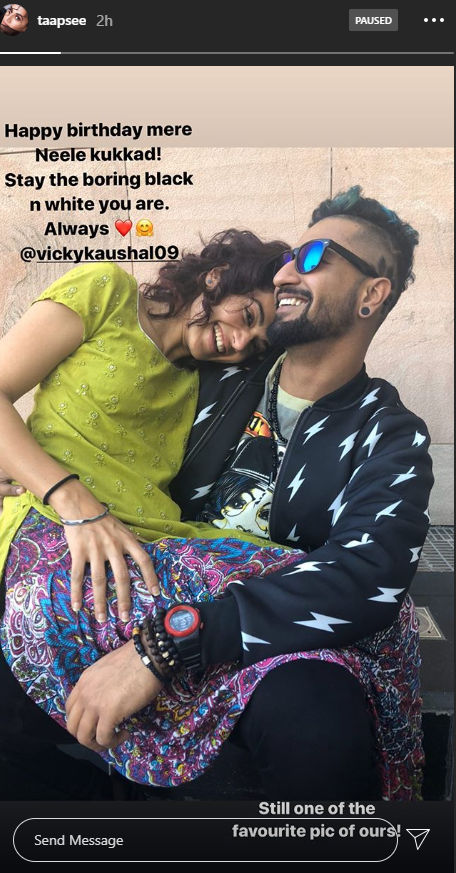 The two stars have worked together in Manmarziyan which also starred Abhishek Bachchan in a pivotal role. The Anurag Kashyap directorial film revolved around Rumi (Taapsee) and Vicky (Vicky), who are in love, gets caught by Rumi's family and pressurized to get married. However, when Vicky refuses to commit, a marriage broker brings in Robbie (Abhishek) as a prospective suitor.

Apart from Taapsee, Vicky also received sweet birthday wishes from his brother and actor Sunny Kaushal. The Gold actor shared a gift od sweet and memorable memories that he shared on his social media platform. Sunny took a stroll down the memory lane and tried to make the day special by posting several throwback pictures of the two brothers staring from their childhood to the recent ones. Apart from sharing the throwback pictures, Sunny also penned his emotions on Instagram where he described how things have not changed between them over the years.

Meanwhile, on the work front, Vicky Kaushal opened up about his upcoming film, Ashwatthama.In a recent interview, Vicky Kaushal revealed that the project will go on floors by 2021. Vicky Kaushal also shared that Ashwatthama will be “ambitious and huge”. He added that both director Aditya Dhar and producer Ronnie Screwvala are trying their hand at something that has not been attempted in Bollywood.  The actor added that he is waiting to start the journey of Ashwatthama.