Vicky Kaushal and Taapsee Pannu shares quite a close friendship and enjoy pulling each other's legs. On a talk show, Taapsee revealed her nickname for Kaushal.

Taapsee Pannu and Vicky Kaushal shared screen-space with each other in the movie Manmarziyaan. Taapsee and Vicky have shared a close bond after the movie and are one of Bollywood's popular BFF pairs. They are almost always seen pulling each others' legs. In the talk show hosted by Neha Dhupia, BFFs with Vogue, the two actors had recently made an appearance. On the show, Taapsee Pannu revealed the nickname she has for Vicky Kaushal.

Taapsee Pannu revealed that she calls Vicky Kaushal 'Lul' which is a common slang word in Delhi. However, Vicky immediately turned it into an acronym for something positive, 'Launde You're Lovely'. The scene also became of the top moments from the episode. The two actors share quite a good camaraderie off-screen. In another segment, Taapsee also reportedly revealed that she did not find him "hot" but thought he was a "marriage material". Vicky also shared that Taapsee is a "great talker" while he dubbed himself as a "great listener" pulling the actor's leg. Reportedly, the actors had bonded over WhatsApp even before they met in person.

Taapsee Pannu had also revealed in an interview with a daily news portal that she had gotten completely drunk at the wrap-up party of Manmarziyaan. And her drinking partner was none other than Vicky Kaushal. Lying in the garden in a drunk state, Taapsee reportedly told her co-star that it was where she would sleep that night. Vicky added that the garden was a pleasant spot for the cast and crew but a drunk Taapsee took the concept too far by planning to sleep there. He apparently had to threaten her with "I'm leaving" for her to ditch the plan.

When Taapsee Pannu had shared her childhood picture for Save The Children drive, Vicky Kaushal had pulled her leg. The picture showed a young Pannu holding winner trophy for some sports event. Vicky commented, "Pakka do chaar ko dhakka zaroor maara hoga" meaning "she had definitely pushed one or two". 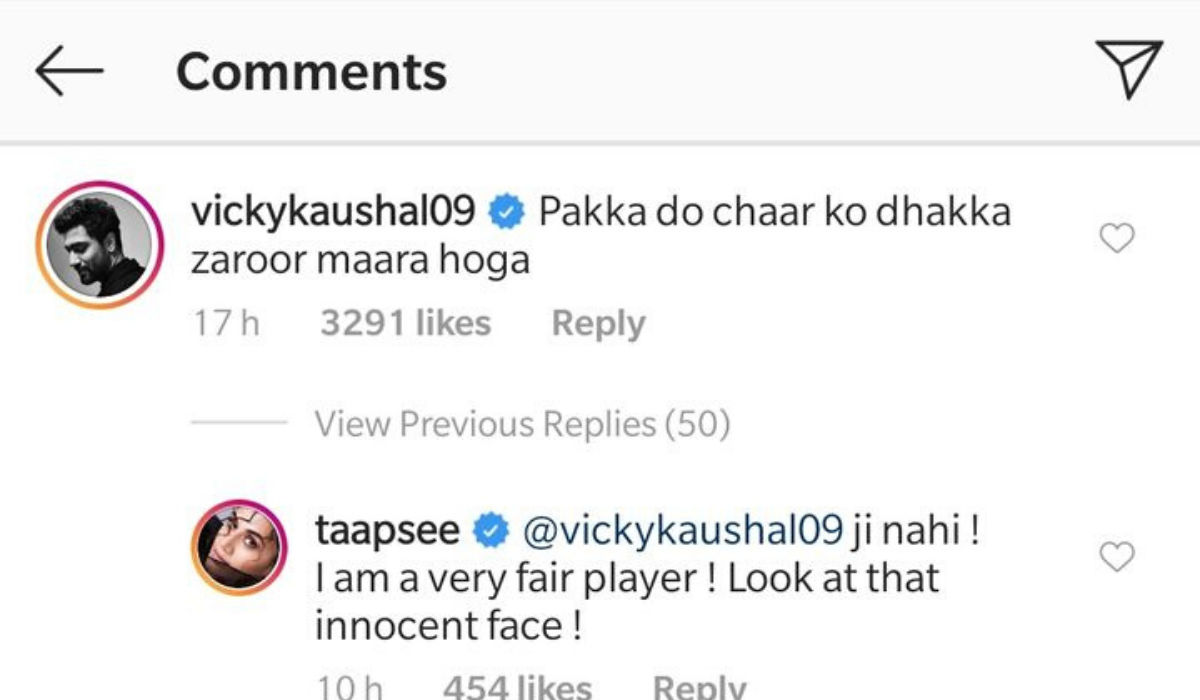