Tahira Kashyap recently shared a photo of her homegrown grapes and wrote a hilarious caption. A few celebrities complimented her for her funny poetic skills

Tahira Kashyap is known to be very active on her social media. She does not hesitate to post random photos while she is at home with her family. She recently shared a photo of her homegrown fruits on her Instagram. She posed with the grapes in a hilarious way which cracked her fans up.

Tahira Kashyap recently shared a photo of her homegrown grapes. She posed with them and held them like a pair of earrings which her followers thought was hilarious. She also wrote a funny poetic caption and mentioned that she did not have a shower. Tahira in her caption wrote, "Grapes are sour, I still haven’t had a showerðŸ˜ #winterishere #homegrowngrapes" She also made a reference to the Game of Thrones saying that 'Winter is here'

Grapes are sour, I still haven’t had a showerðŸ˜ #winterishere #homegrowngrapes

A few celebrities commented on Tahira's post such as dancer Mukti Mohan who complimented her for her poetic skills. Aparshakti Khurrana and Karanveer Bohra sent in laughing emojis. An Instagram user wrote that people should join the 'no shower' club to which Tahira Kashyap laughed. Many of her followers also sent in laughing emojis and called her cute. Take a look at the comments on Tahira's post. 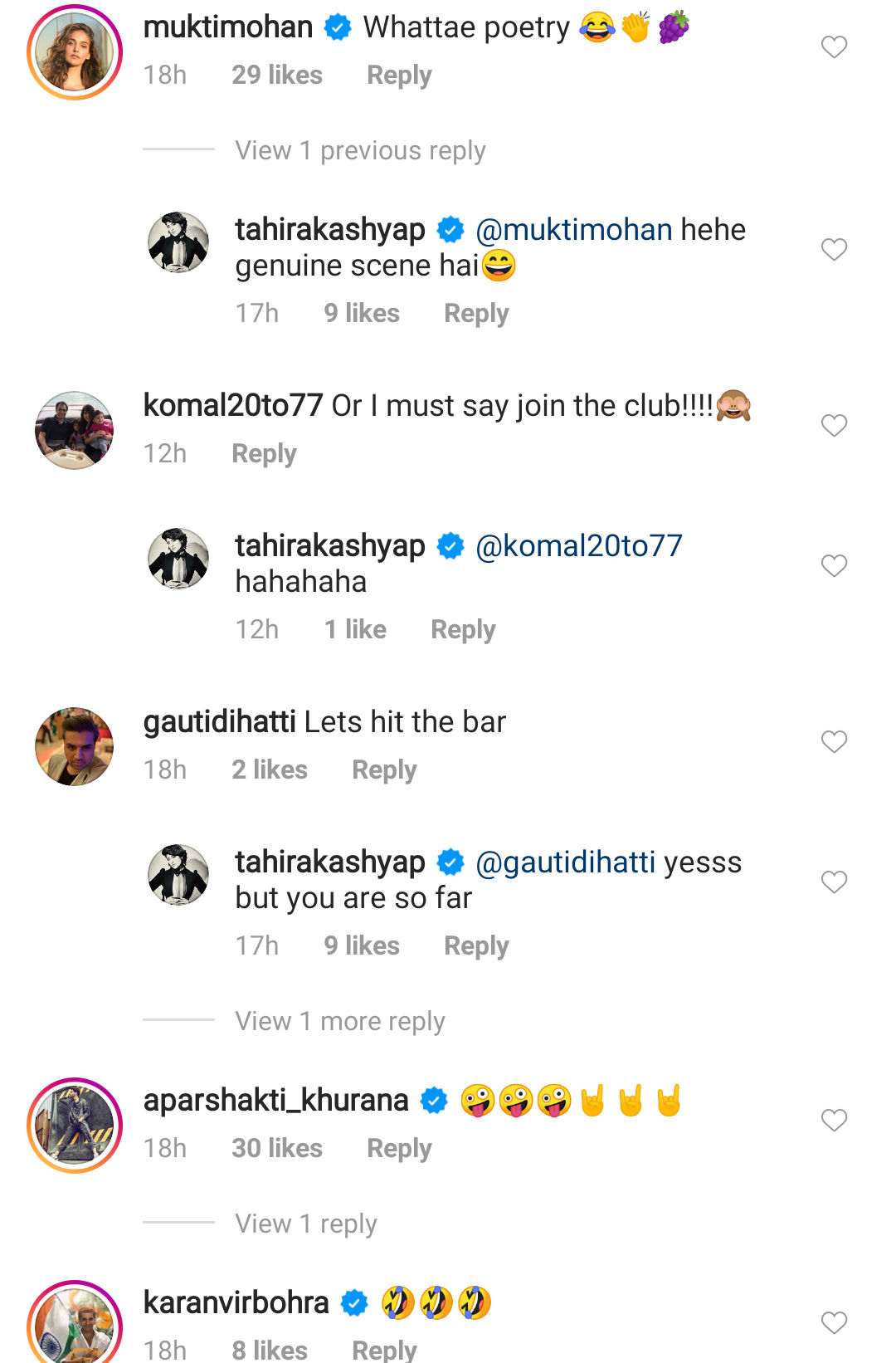 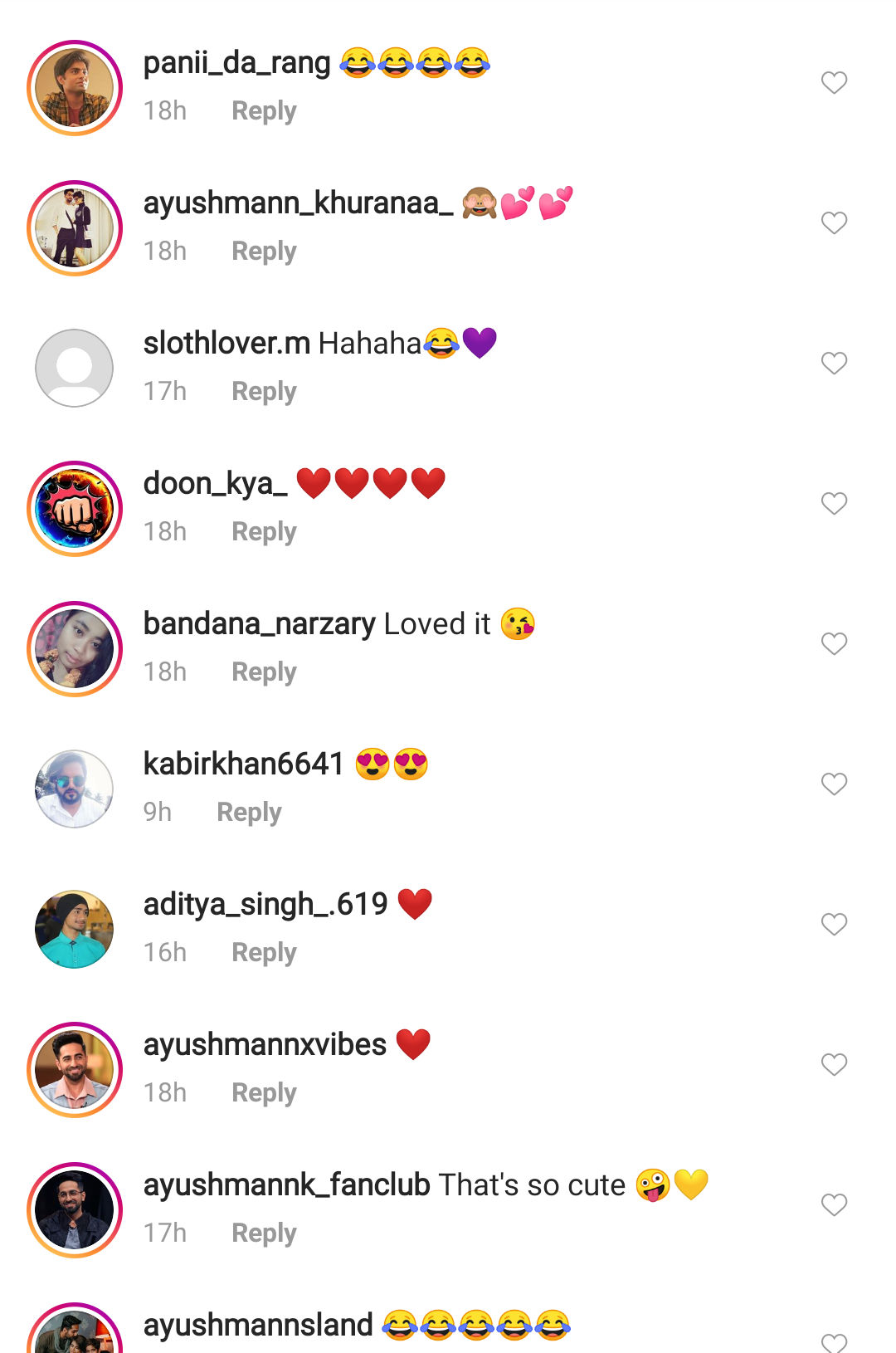 Tahira Kashyap recently shared a series of photos from her morning walk. She wore a green and white hoody as she visited a lake. She wrote that it is a new determination. She wrote that she is determined to a fitter self and wrote that she is not waiting for the new year to begin to start working out. She wrote, "Early morning at the lake for a quick jog/walk for the first time (not an early riser, but now working towards it) Sun being the only filter." Have a look at Tahira Kashyap's photos.

New determinations! Towards a fitter self. Not waiting for new year! Early morning at the lake for a quick jog/walk for the first time (not an early riser, but now working towards it) Sun being the only filter #lake #nofilter #earlymorning

She also shared a photo from Karwa Chauth earlier this week. She wore a red salwar suit that has an Indo-western twist to it. Tahira Kashyap and Ayushmann Khurrana are currently living away from each other because of shoot schedule. She wrote, "Within the same city and yet a long-distance one this year too @ayushmannk FaceTiming this day has become an every year ritual." The photo was taken by her 8-year-old who taught her how to pose for the photo.

Opening up my heart to the moon!â¤ï¸ Within the same city and yet a long distance one this year too @ayushmannk FaceTiming this day has become an every year ritual ðŸ“¸ by the 8 year old who told me how to pose for this one!