'Tanhaji' star Neha Sharma and her sister Aisha Sharma met Rohit Sharma at a blockbuster event. The union of the Sharmas sparked fun comments from netizens.

Be it the film industry or the Indian cricket team, there are numerous celebrities with the surname ‘Sharma.’ But what are the odds that the three of these Sharmas would come together, that too in Madrid? The union was not surprising since the blockbuster El Clasico was played in the Spanish capital on Sunday.

This one is for my Insta fam . For the ones who always comment “India has @rohitsharma45 and the #sharmasisters 😛 “ . So here it is all the Sharma’s in one frame . Had to do it 🤪 @nehasharmaofficial #Sharmasisters #laliga

Netizens had a gala time over Aisha’s caption, one posting the popular ‘Sharmaji ka ladka’ term for Rohit. One pointed out how a member of the cricket team, Ishant Sharma was missing.

Another asked if Rohit was their brother. A netizen quipped how much they were blushing (meaning ‘sharma’ in Hindi). They also termed the actresses as ‘hotties’ as they stood with the ‘Hitman.’ 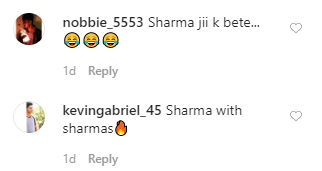 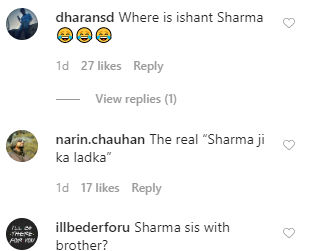 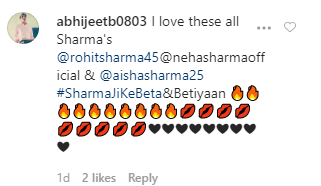 The Sharma sisters ended on the losing side since they cheered for Barcelona who were beaten by Real Madrid 2-0.  The duo posted numerous pictures and videos dressed in the  Barcelona jerseys, and despite the loss termed it as a memorable experience. TV actors like Karan Wahi and Rithvik Dhanjani were also spotted with them. 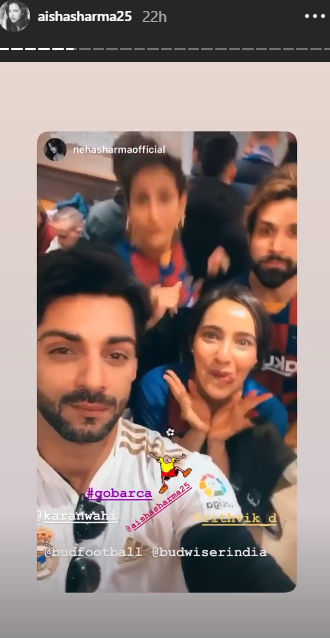 Meanwhile, Rohit Sharma’s presence was missed as India lost to New Zealand in the ODIs and the Tests as he is out due to an injury. While it is not clear which team he supported, he shared a pic with wife Ritika Sajdeh from the stadium. He termed it as a ‘surreal experience’, ticking it off his bucket list and having a blast.

Thanks @laliga and @realmadrid for helping me tick this off my bucket list, what a surreal experience. My family and I had a blast. So memorable