Tiger Shroff Flips Over A Car In A BTS Picture From 'War'; Check It Out

Tiger Shroff set the records on fire with his last release 'War' that had several action sequences. Check out the BTS picture from the film.

Tiger Shroff was last seen in Siddharth Anand’s War that went on to become one of the biggest hits in 2019. His action stunts in the film managed to win over the hearts of both the fans and critics. War was an epic celebration of two of the most popular action heroes in Bollywood, Hrithik Roshan, and Tiger Shroff, coming together.

Tiger Shroff took to social media to share a few snippets from his War journey. In the picture that he shared, one can catch a view of Tiger Shroff attempting to flip over a car. He even captioned the picture as, “Just another day in the life…war bts”. 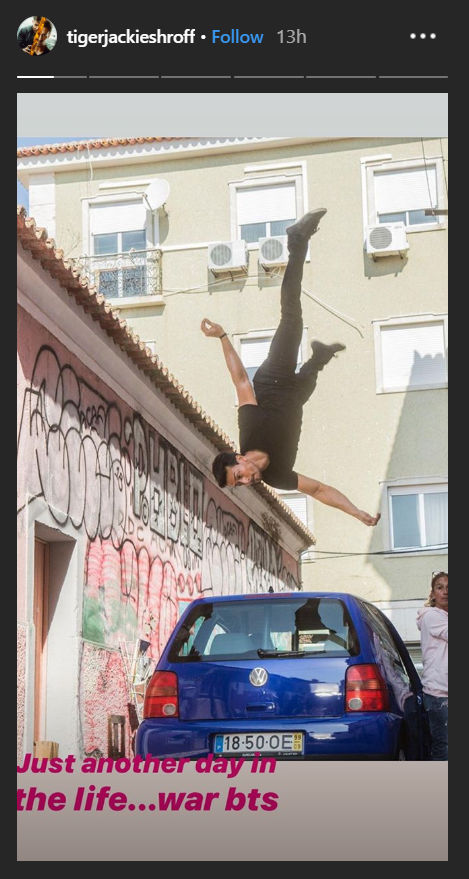 Tiger Shroff has expressed on several occasions his love for action. For those unversed, Tiger is trained in martial arts and several dance forms as well.

The result of the same was seen in the film and fans absolutely loved the actor in War. Tiger managed to win over the hearts of the audience in War with his jumps, flips and his different parkour skills.

War featured Tiger Shroff in the role of Khalid, a RAW agent. The film follows the story of a mentor and protegee who turn against each other but then come together for a national mission. Throughout its run at the box office, War made stunning collections and reportedly crossed over ₹400 crores at the box office.

On the other hand, Tiger Shroff is currently filming for his next project, Baaghi 3. The film also stars Shraddha Kapoor and Riteish Deshmukh in pivotal roles. The movie will also have a special dance number by Disha Patani.

There have also been reports that Tiger Shroff’s real-life father Jackie Shroff will play the role of his reel-life father in Baaghi 3. The film is directed by Ahmed Khan and is slated for a March 2020 release.