Tiger Shroff’s current film, 'Baaghi 3' has already been gaining a huge fan base. The actor recently got a new fan who even asked him for an invite.

Tiger Shroff kickstarted his career in Bollywood with Sabbir Khan's Heropanti in 2014. He is very popular for his unique fighting tricks and martial arts sequences that he showcases in his films. With the brilliant action moves and chiselled physique, he is considered to be one of the best action heroes we have today.

His last release, Baaghi 3 has been a hit with the audience. The film has already managed to collect more than Rs 90 crores at the box office so far. Many fans have not stopped gushing about Tiger Shroff’s character, Ronnie from the film. However, the actor has received a special fan request recently.

Tiger Shroff gives out an invite for a special fan

Recently, the Baaghi actor shared a snap on his social media where South Indian superstar Allu Arjun’s son, Ayaan was talking about how big a fan he is of the actor. Allu Arjun also shared how his son has been “obsessed” with the actor and the movies from the Baaghi franchise. He further shared how Ayaan lovingly refers to Tiger Shroff as “Tiger Squash.”

In the video, Ayaan is seen asking Tiger Shroff to give him an invite to the shooting of his film. When asked why he wanted to see Tiger Shroff, young Ayaan was quick to reply that he wants to witness his gun fighting scenes.

The War actor quickly replied saying that Ayaan is always welcome on all the sets of his films. He also added that he loves his new name that Ayaan has given him. This cute interaction between Ayaan and Tiger Shroff has made fans go ‘aww’.

Here is Tiger Shroff’s reply to the same: 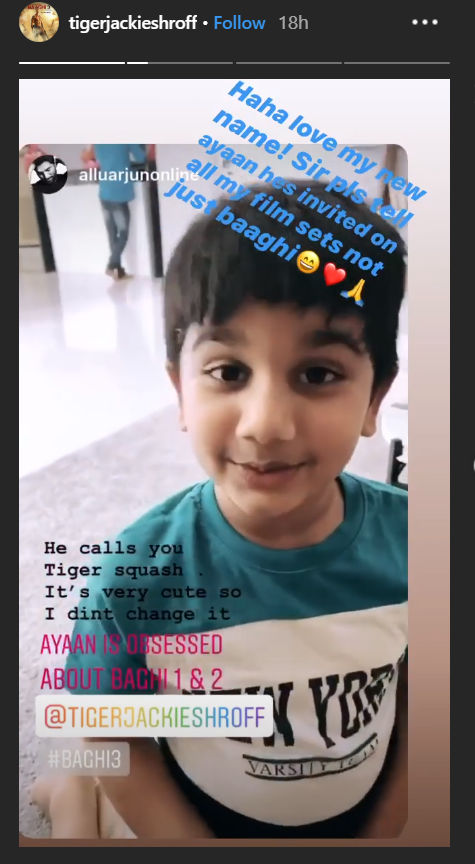 On the work front, Tiger Shroff will be next seen in the remake of the Hollywood franchise, Rambo. The film is directed by his War director Siddharth Anand and is expected to release in 2020. Tiger Shroff recently announced that he will also be seen in the sequel to his 2014 debut film, Heropanti.