Its been six years since Bollywood’s handsome hunk Tiger Shroff and actress Kriti Sanon marked their debut in the entertainment industry with Heropati.

Its been six years since Bollywood’s handsome hunk Tiger Shroff and actress Kriti Sanon marked their debut in the industry with Heropanti. As the film completes six years of its release on May 23, the two actors took a walk down the memory lane and shared a series of pictures on their social media while recounting those memorable moments that they spent on the sets of the film and while promoting it.

The Baaghi actor who portrayed the role of Bablu in the film took to his Instagram age and shared a series of pictures to commemorate the special occasion. One of the pictures shows Tiger and Kriti Sanon posing for a photoshoot. The second picture is of Tiger with the producer Sajid Nadiadwala and the other one is with the director of the film, Sabbir Khan. While captioning the post, Tiger recapitulated the old memories and thanked the entire team of the film for selecting him over many and also making him a small part of their journey. At last, the Baaghi 2 actor concluded the caption by writing that he is blessed to have started his journey in Bollywood with such great people.

After reading the emotions of Tiger, Sabbir was quick enough to reply and poured his hearts over the post in the comment section. Kriti Sanon who also marked her debut in the film with Tiger commented with his reel name, “ Bablu.” Tiger’s little sister Krishna Shroff also showered her love in the comment section with just one word, “blessed.” 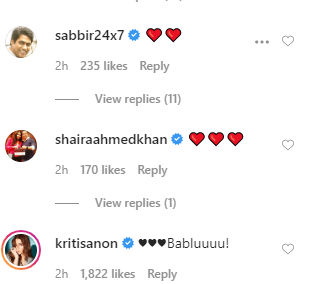 Meanwhile, Kriti also got nostalgic as the film clocked six years of release. The actress shared the poster of the film and expressed her happiness of watching herself in a poster. An elated Kriti wrote that the feeling of watching her in the poster was just surreal. She recalled the time when she just jumped off the bed and rushed to see herself in the newspaper. She expressed her gratefulness to all the people who got her into the magical world of movies.

The story of the romantic action flick revolves around Renu (Sandeepa Dhar) elopes with her lover Rakesh (Dev Sharma). Her father, Chowdhary (Prakash Raj), kidnaps Bablu (Tiger Shroff), who knows Renu's whereabouts, along with two of his friends. But Bablu falls in love with Dimpy (Kriti Sanon), Chowdhary's younger daughter.

PEOPLE HAVE PLEDGED SO FAR
LATEST NEWS
View all
3 hours ago
Akshay Kumar worked in many movies that were shot in London; See list here
2 hours ago
'Man isn't a season, yet he changes': Anupam Kher ponders over the nature of change; Watch
3 hours ago
Lisa Haydon flaunts sunburn after hiking at a scenic spot in Hong Kong; See pic inside
4 hours ago
Sanjay Dutt expresses love for mom Nargis in lovely tribute on her 91st birth anniversary
3 hours ago
Unseen Pic of the Day: Baby Deepika is all smiles in her mother's arms