Tiger Shroff's Mom Is All Hearts For Disha Patani's 'Malang', Gives Her THIS Cute Nickname

Disha Patani’s Malang has hit the theatres, and everyone is wishing her luck and congratulating her for the same. Tiger Shroff’s mother Ayesha Shroff also congratulated the actor for her film. Read on to know more:

On February 7, Ayesha Shroff took to her official Instagram handle to congratulate Patani for Malang. Shroff posted a photo of a newspaper cut-out with ratings for the film. The cut out also had words of praises for the film by critics. Patani loved the gesture and shared the same in her own Instagram story. Here is the Instagram story: 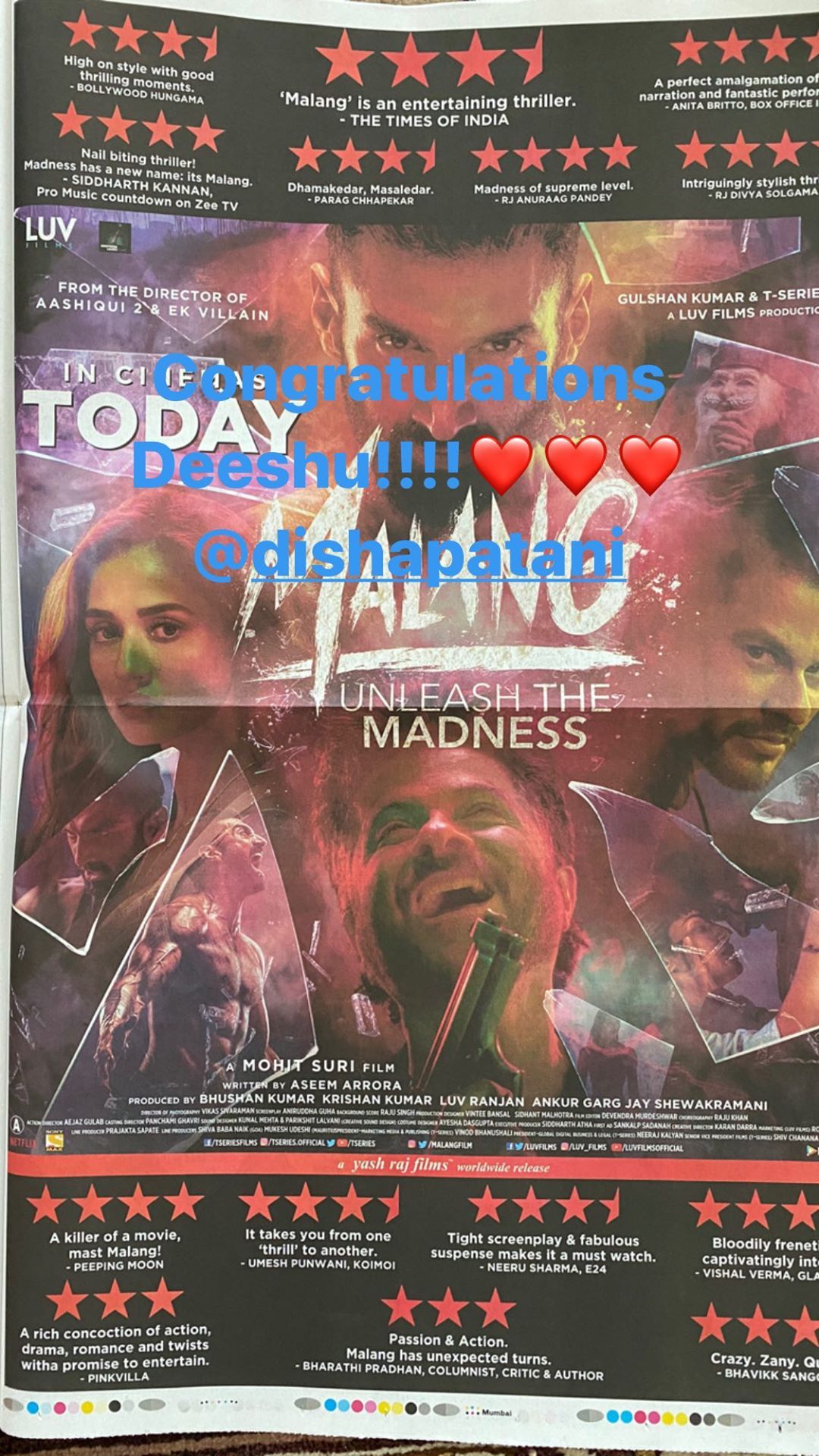 Ayesha Shroff congratulated Disha Patani by calling her 'Deeshu', while the actor replied, “Love you aunty”. For the unversed, Disha Patani and Tiger Shroff were seen together in Baaghi 2, the second instalment of the Baaghi franchise. Now, Shroff is all set for the release of his upcoming film Baaghi 3. Shraddha Kapoor will replace Patani in this film. It is scheduled to be release on March 6, 2020. It will also feature Ritiesh Deshmukh. It is an official remake of the 2012 Tamil film, Vettai.

READ | Sofia Richie Unfollows Kourtney Kardashian; Refuses To Be A Part Of 'KUWTK'

On the other hand, Malang is a 2020 romance action film directed by Mohit Suri. It is produced by Luv Ranjan, Ankur Garg, Bhushan Kumar, Krishan Kumar, and Jay Shewakramani. It features Aditya Roy Kapur, Anil Kapoor and Kunal Khemu in the lead roles. The plot of the film revolves around a couple's seemingly perfect life, and how it comes crashing down when they become linked to a corrupt cop and his righteous counterpart.

PEOPLE HAVE PLEDGED SO FAR
Malaika Arora's decade-old album songs that one might have missed out
Perfectionist Aamir Khan finds his way to have the perfect OTT debut? Find out!
Alaya F shows fans how to strike the right pose for Instagram, see pics
'Article 15' director Anubhav Sinha opens up about the most 'conflicting part' of the film
Don't want to do sensuous roles anymore: Mahie Gill
DO NOT MISS
DELHI VIOLENCE TIMELINE
'DELHI VIOLENCE AN INTEL FAILURE'
IT MIN MEETS MICROSOFT CEO
AADITYA DEMANDS APOLOGY
INSPIRED OR COPIED?
CAT'S REACTION AMUSES TWITTER