Tiger Shroff recently shared a marvellous video on his social media which was inspired by the film The One. Disha Patani had an epic reaction on the video

Tiger Shroff recently took to social media to share the Matrix-inspired video which consists of some high octane action sequences. Tiger Shroff can be seen dodging some bullets while performing some marvellous stunts in the video. Tiger Shroff revealed in the caption that this is his tribute to the Matrix film, The One. Check out Tiger Shroff's video. 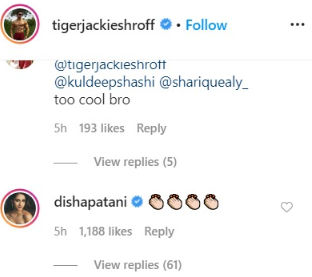 Tiger Shroff and Disha Patani have earlier grabbed a lot of headlines for their camaraderie. The two are also rumoured to be dating even if they have never confirmed their relationship. Not only this, Disha Patani recently also left a lovely reaction on Tiger's post. Tiger had shared a picture from the sets of his film Baaghi 3 wherein he can be seen donning a plain black t-shirt with denim jeans and sunglasses. Disha was quick to leave a comment on the lovely picture. Take a look.