Tiger Shroff is well-known for his action scenes. The actor will reportedly next be seen fighting three villains in his upcoming film Baaghi 3. Know more here.

Tiger Shroff was last seen in the action-adventure War that hit the theatres in October this year and had a huge success at the box office. Bollywood's new action star is now gearing up for the third instalment of his upcoming popular Baaghi franchise, which is scheduled to hit the theatres in March 6, 2020. Tiger Shroff had earlier shared a picture from the shoot of Baaghi 3 where he was seen flaunting his big biceps in a sleeveless shirt.

This time the actor took to his social media handle to showcase his ability and skills at performing action by sharing a video of him doing the impeccable Helicopter Kick. The actor is quite popular and active on social media. He keeps sharing a glimpse of his personal and professional life with his followers. He even shared his looks from the sets of Baaghi 3 and that stunned his fans and they are now eagerly waiting to witness his action-packed avatar on the silver screen. 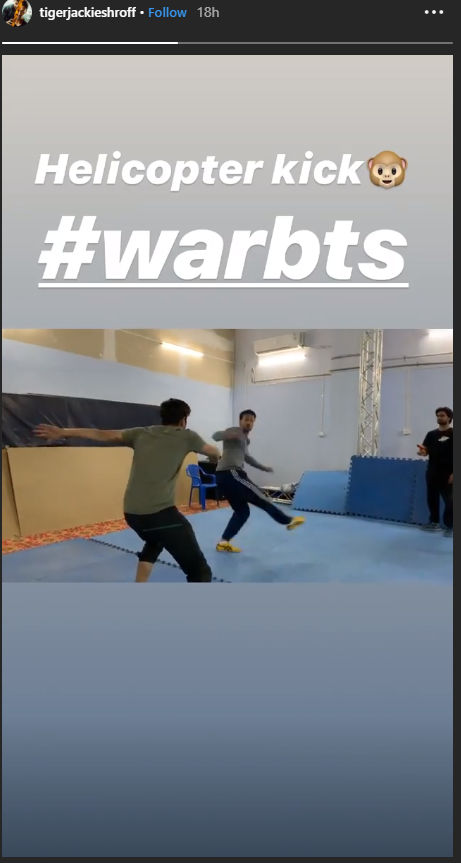 Tiger Shroff is also known among his fans as the youngest action hero who never fails to stun his fans with his amazing acting skills on the silver screen. He also often shares his fitness routine videos to give his fans some fitness tips to stay fit and healthy. He is also loved by his fans for sharing his fun BTS videos from the sets of his films.

Check out his look from the movie:

Tiger Shroff Is Every Bit An Action Hero In Baaghi 3; Things We Know About The Film So Far

With his last performance in the action-packed drama War, the actor has set a whole new benchmark for himself. Now the fans expect some more high-octane action scenes from his Baaghi 3 project. As per the reports, Tiger Shroff's Baaghi 3 will see him perform some daredevil stunts that fans have never seen before on the silver screen. Meanwhile, Tiger Shroff was busy shooting in the rough terrains of Serbia in extreme climatic conditions for his movie.