Kylie Jenner and Kendall Jenner's childhood picture together is making rounds on the internet, and even the former shared it on her Instagram. Check it out.

Kylie Jenner’s photos and Kendall Jenner’s photos often get posted on many different fan pages. But, recently one of Kylie Jenner’s fan pages shared an adorable unseen picture of Kylie Jenner and Kendall Jenner. The picture is a collage of the two sisters posing together in their childhood and then re-doing the same picture in today’s time. The fan page captioned this picture, “besties since birth ðŸ¥º edit credits to @deariekendall & inspo creds to @kenxdalls ( kylie repostedðŸ˜© )@kyliejenner @kendalljenner #kyliejenner #kendalljenner”, also mentioning that Kylie Jenner reposted this picture on her official Instagram handle stories. Kylie Jenner's photos and Kendall Jenner's photos have time and again sparked the internet.

Also Read | Did You Know Kendall Jenner And Kylie Jenner Have Popular Celebrity As Their Godmother? 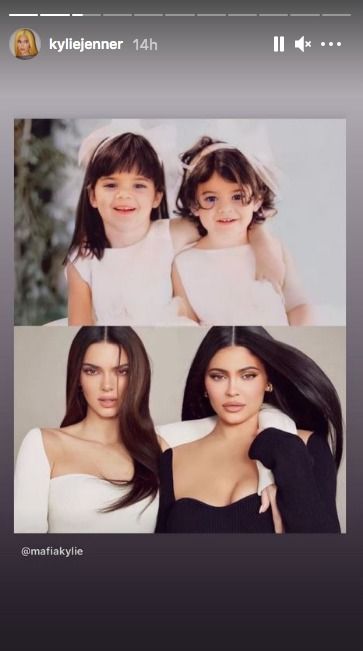 Kylie Jenner gave a glimpse of the entire tour and the huge house that they were living in through her social media handle. According to reports from DailyMail, the house that they were staying in covers a total area of 20,000 sq ft and has seven bedrooms. The mansion also has a theatre inside, an expansive deck, and a huge patio with a beautiful view of hills covered in snow. It was a four-storied mansion that reportedly cost Kylie Jenner and her family a cost of $45,000 for one month-long stay. The house cost $25,000 on a daily rental basis. From the pictures, it looked like Kylie Jenner and Kendall Jenner brought in their new year in a very happy, sweet, and relaxing way.