Sonali Bendre Behl took to Instagram on Thursday, January 07, 2021, to share a major throwback picture of her where she looks totally unrecognisable.

Hum Saath Saath Hain actor Sonali Bendre Behl took to Instagram on Thursday, January 07, 2021, to share a major throwback picture of her where she looks totally unrecognisable. Along with the picture, the actor also went on to leave a sweet caption revealing details about the same. On seeing this post, Fans are sure to go all gaga over this adorable unseen picture.

Taking to her Instagram handle, Sonali Bendre Behl went on to share an unseen picture of her which is too cute to miss. In the picture, the actor can be seen striking a stunning pose and is all smiles for the camera. Sonali can be seen donning an orange dress. She completed her look by opting for a wavy hairdo, well-done brows, bronze highlighter and dewy makeup. Along with the picture, the actor also captioned the post with a red heart emoji along with the hashtag #tbt. Take a look at the post below.

As soon as Sonali Bendre shared the post online, fans went all out to comment on all things happy and nice. The post went on to receive likes and several comments from fans and netizens. Some of the users went on to comment on how stunning the actor used to look, while some went on to go all gaga over the post. One of the users wrote, “You are so prettyâ¤ï¸ a beautiful soul”. While the other one wrote, “Pretty and strong women”. Take a look at a few more comments below. 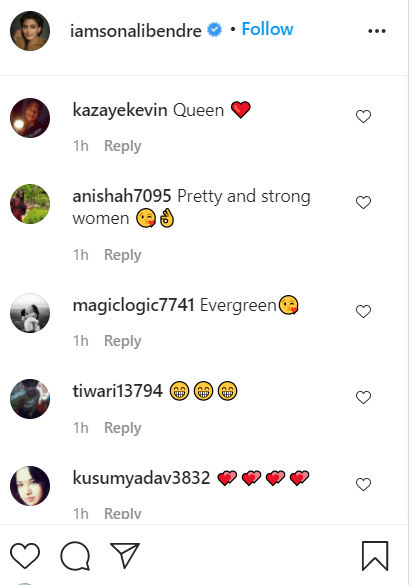 Sonali Bendre made her acting debut with the movie Aag (1995) at the age of 19 and since then there was no turning back for the actor. However, in the year 2004, the actor revealed that she was diagnosed with cancer and took a sabbatical and went to New York for her treatment.

In the year 2012, Sonali Bendre made her comeback with Once Upon a Time in Mumbai Dobaara! and was also a part of India's Best Dramebaaz as a judge. The actor was seen shooting for an advertisement on television and she went on to share a BTS video of the shoot. Along with the video, Sonali also told her fans that she is in a safe environment while working. Watch the video below.