Urvashi Rautela won hearts as she helped a fan to put a mask on a baby's face in a video on social media. Check out the actor's video on Instagram:

Bollywood actor Urvashi Rautela engages with her fans and followers on different platforms. Recently, she took to social media and shared a video of herself through her official Instagram handle. It features the actor while posing with a fan as photographers are clicking her. Here is everything that you need to know about Urvashi Rautela’s latest post on Instagram. Read on:

Actor Urvashi Rautela took to Instagram and shared a video through her official handle on September 16, 2020, Wednesday. It showcases the star while posing with a fan for a picture. However, she notices the baby in his arms who has not worn a face mask. So, the actor points out the same before he tries to put it on with one hand. Urvashi Rautela also attempts to help him put the mask on the baby’s face.

Urvashi Rautela has donned a multi-coloured cropped top in the video. She has teamed it up with a pair of black pants. For a rounded off look, the actor has sported sunglasses, tied her hair in a tidy ponytail, and has put on a face mask as a preventive measure amid COVID-19 pandemic.

In the caption accompanying her social media post, Urvashi Rautela has mentioned, “Baby’s face mask ðŸ‘¶ ðŸ¼ðŸ˜· ðŸ‘¼.” She has dropped adorable emoticons like a toddler, milk bottle, and a masked smiley, and an angel. Moreover, the actor has added hashtags such as Love and Urvashi Rautela, along with the description. Check out Urvashi Rautela's Instagram video:

Within a few hours of sharing the video on social media, Urvashi Rautela garnered more than 1 million views and around 1800 comments on the platform. Numerous fans, followers, and fellow celebrities dropped their replies on the post. Many among them called her a beautiful soul and applauded her humble act.

On the other hand, various people expressed themselves through a series of emoticons such as hearts, heart-eyed smileys, angel, fire, blossoms, and thumbs up, to name a few. Here are some of the comments on Urvashi Rautela’s post that you must check: 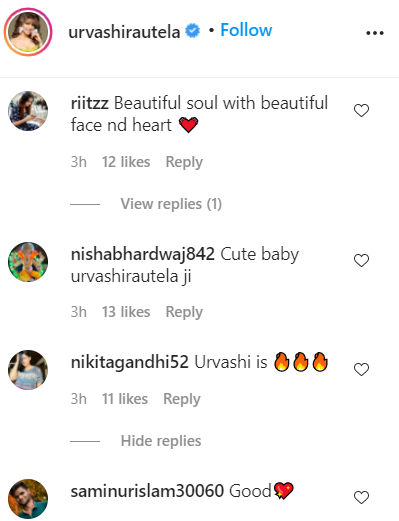