Vaani Kapoor took to social media and revealed her fresh morning look in the video through her official Instagram handle. Check out her latest post.

Bollywood actor Vaani Kapoor has been in touch with her fans and followers on different social media platforms by posting regularly. Recently, she took to social media and shared a short clip of herself on her official Instagram handle. It features the actor in front of the clear sky as she reveals the bright sun behind her. Here is everything you need to know about Vaani Kapoor’s latest clip on social media. Read on:

Vaani Kapoor shared a video of herself through her official Instagram account on September 10, 2020, Thursday. It showcases the star with a minimal makeup look. She has donned a white plain t-shirt and paired it with an orange shaded jacket. For a rounded off look, Vaani Kapoor has left her straightened hair loose for the video. The actor has grabbed attention with her killer expressions and attitude in the clip. Moreover, her gleaming eyes have stolen the show.

While looking into the camera, Vaani Kapoor slowly reveals the clear blue sky behind her. She also shows the bright sun while doing the same. In the caption accompanying her social media post, the actor has mentioned that the sun is up. The actor used an emoticon for the star. She wrote, “â˜€ï¸ is up!”. Check out Vaani Kapoor’s latest video clip on Instagram:

Within a few hours of sharing the post on social media, Vaani Kapoor has received more than 2,57,000 likes and over 523 comments on the photo-sharing platform. Numerous fans, followers, and fellow celebrities of the actor have dropped their responses on Instagram. Many among them could not get enough of her fresh look.

They applauded her beauty by writing gorgeous, sunshine, and talked about her killer attitude and expressions in the video. Meanwhile, others expressed themselves with emoticons. They took to the comment section and dropped hearts, heart-shaped smileys, fire, hugs, blossoms, and claps, to name a few. Here are some of the responses from Vaani Kapoor’s fans and followers on the platform that you must check out: 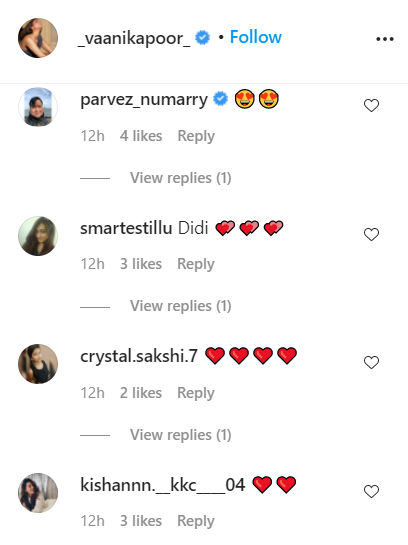