Varun Dhawan ‘on Top Of The World’ With Sara Ali Khan In Goa Post From 'Coolie No.1' Sets

Varun Dhawan and Sara Ali Khan will be seen together in David Dhawan's 'Coolie No.1'. Read to know about the actors shooting for a romantic number in Goa.

Varun Dhawan and Sara Ali Khan will be seen together for the first time in Coolie No. 1. It is a remake of the 1995 film by the same name. Several media reports suggest that the shooting of the film is undergoing at several locations in India and Bangkok. Earlier today, February 18, Varun Dhawan shared video snippets from their shoot location.

Varun Dhawan shares BTS video from the sets of Coolie No.1

Earlier, reports suggested that Sara Ali Khan and Varun Dhawan will be seen in a romantic track which will be shot in Goa. The locations involving beautiful churches and extensive beaches is said to be ideal for the song. It is reportedly an original composition by Tanishk Bagchi and will be shot in Panjim City over the next six days.

Adding to this, Varun Dhawan shared a series of videos with co-actor Sara Ali Khan from the beachside location of the set. Varun says that he is 'literally on top of the world' as the set was at a certain height from the ground. He also showed Sara sitting in the background. The set looked like a giant makeshift hammock suspended above the beach.

While Sara Ali Khan sat scared at the height, Varun Dhawan, looked relaxed and also pushed the Love Aaj Kal actor while trying to scare her. According to reports, Sara Ali Khan’s character in Coolie No.1 is from Goa and thus the song sequence is shot in the scenic backdrops of the coastal state.

Here is what Varun shared: Also Read | Varun Dhawan And Sara Ali Khan's Romantic Song In 'Coolie No.1' To Be Shot In Goa 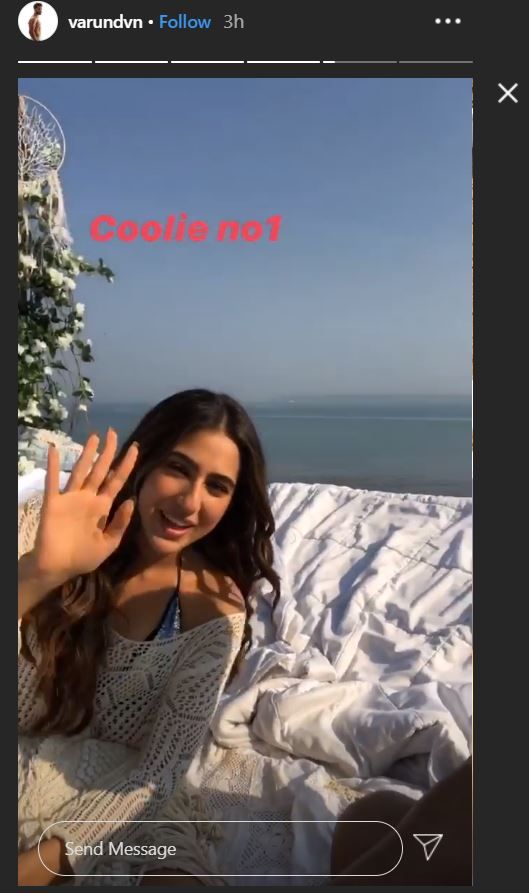 Also Read | Sara Ali Khan 'ecstatic' To Be In Karisma Kapoor's Shoes For 'Coolie No. 1' Remake 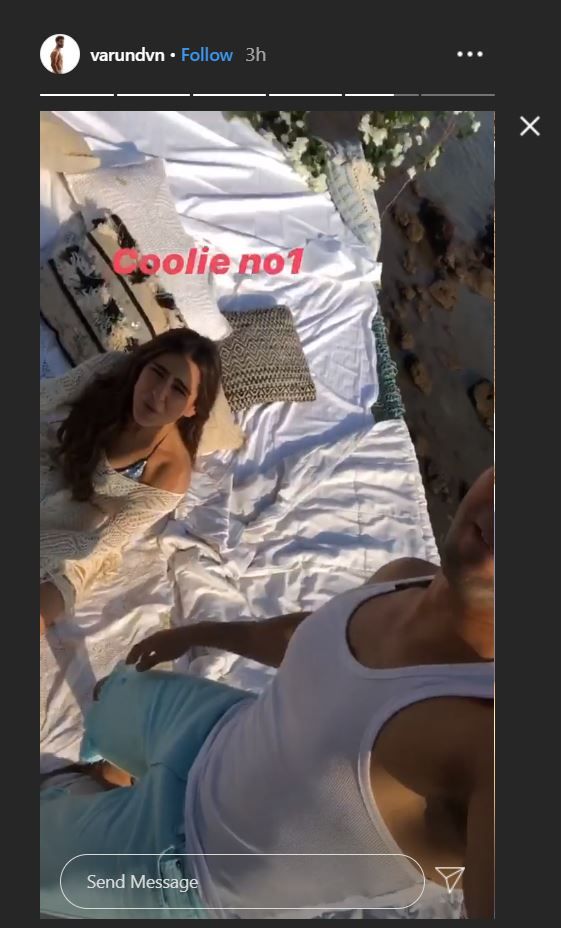 Coolie No. 1 is a comedy film directed by David Dhawan. The remake will mark the director's 45th film in Bollywood. The movie also stars Paresh Rawal, Rajpal Yadav and Johny Lever with others. It is produced by Vashu Bhagnani, Jackky Bhagnani and Deepshikha Deshmukh. Coolie No.1 is scheduled to release on May 1, 2020.

Also Read | Varun Dhawan And Sara Ali Khan Will Soon Be Seen In 'Coolie No 1'; Here Are Movie Updates

PEOPLE HAVE PLEDGED SO FAR
'Horrible': Bollywood celebrities fume at video of attack on health workers in Indore
Shraddha Kapoor’s best films according to IMDb ratings | Read
Rishi Kapoor slapped Ranbir Kapoor when he was a child, find out why?
Juhi Chawla shares pictures of peacocks roaming on streets of Mumbai
Katrina Kaif knows how to flaunt her perfect jawline in these photos on Instagram
DO NOT MISS
PEMA KHANDU ON NATIONAL LOCKDOWN
OWAISI ON NIZAMUDDIN CASE
WATCH: PREGNANCY Q&AS
'NIZAMUDDIN MARKAZ CREATING IMPACT'
HOW ACCURATE ARE TEMPERATURE GUNS?
FANS EXCITED FOR KOHLI-KP TALK