Varun Dhawan is seen dancing with internet dance sensation Baba Jackson while promoting Street Dancer 3D. Check out what a few celebs commented on the video

Street Dancer 3D stars Varun Dhawan, Shraddha Kapoor, Prabhu Deva and Nora Fatehi in the lead roles, along with others. With chartbuster songs and trailer, the movie has good buzz. The team was seen dancing with Yuvraj Singh Parihar, popularly known as Baba Jackson, and a few celebs went gaga over it.

Varun Dhawan, Shraddha Kapoor and team are busy promoting their film Street Dancer 3D. In a video posted by Varun, they were seen shaking a leg with TikTok sensation, Baba Jackson on Muqabla song. The video began with Baba Jackson, impressing the viewers with his swift moves, the film’s cast then joins him, watch the video.

Their dance moves not only mesmerised fans but also several celebrities. This includes Nora  Fatehi, Elli AvrRam, Sana Saeed and Badshah. They expressed their excitement by commenting on Varun Dhawan’s post, see them below. 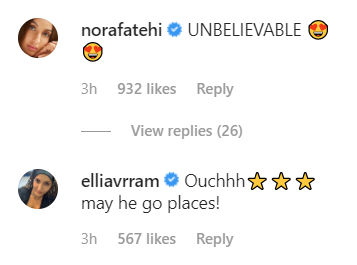 Baba Jackson gained overnight fame with his dance video on Tik-Tok which went viral and noticed by several A-listers Bollywood stars.  A Twitterati shared a complication dance video of Baba and tagged Hrithik Roshan and Prabhu Deva. The tweet got noticed by Hrithik and he retweeted the same saying that it is smoothest air walker he has seen.

Smoothest airwalker I have seen. Who is this man ? https://t.co/HojQdJowMD

After Baba Jackson’s video went viral, several actors’ such as Amitabh Bachchan, Remo D’Souza, Raveena Tandon praised his talent and expressed their feeling about his TikTok videos. In an earlier interview with RepublicTV, Parihar stated, "I would like to thank Hrithik Roshan. I still can't believe. I am getting an amazing response from Bollywood. Just with one comment by Amitabh Bachchan, my life completely changed."

Street Dancer 3D is directed by Remo D’Souza and produced by Bhushan Kumar, Krishan Kumar and Lizelle D'Souza under the banners T-Series and Remo D'Souza Entertainment. Set in London, the movie is about two rival dance groups from India and Pakistan, who have been competing against each other every time they meet, be it at a cafe or at an underground street battle, until they eventually realise that they stem from the same roots and have a common purpose to stand for their people from the Asian subcontinent. Street Dancer 3D is slated to release on January 24, 2020.