Shraddha Kapoor and Varun Dhawan are gearing up for the release of their upcoming film Street Dancer 3D. Check out Varun's funny comment on Shraddha's post.

Shraddha Kapoor and Varun Dhawan are set to share the screen space in Remo D’Souza’s next directorial venture Street Dancer 3D. The duo has been busy promoting their upcoming film and fans have been showering the duo with love. The two stars have always been known to share an amazing bond and an unmissable chemistry. Interestingly, both their fathers have also worked together in the past where these two used to accompany them on outdoor shoots. And while it's known that Shraddha Kapoor and Varun Dhawan have worked on several projects, they are also known for cracking jokes with each other, making each other laugh uncontrollably and being just generally adorable with each other. Here is one such case where Varun Dhawan made a funny comment on Shraddha Kapoor's latest Instagram post: 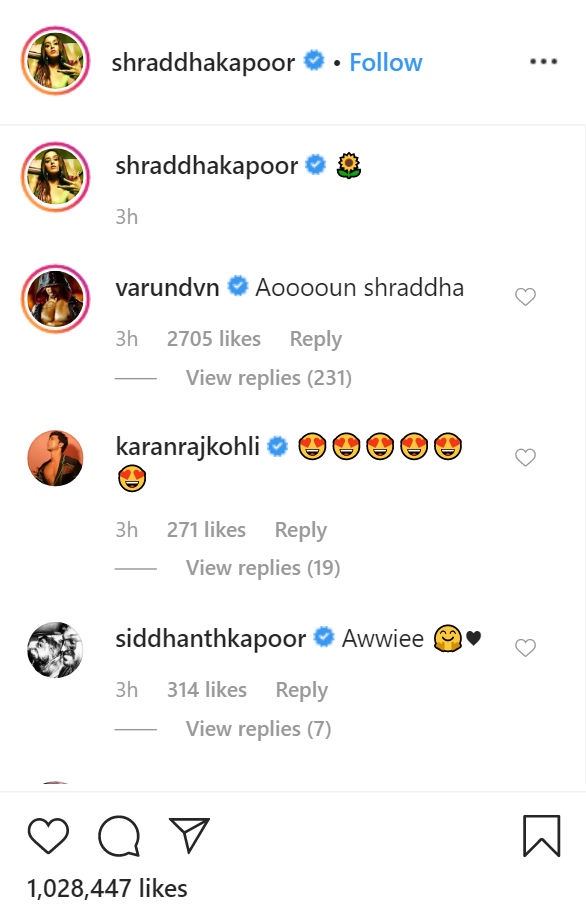 Shraddha Kapoor, who is known for sharing a lot of pictures through her Instagram handle recently posted a series of photos where she is seen acing an all-white outfit. While her fans and a few celebs couldn't hold back and appreciate her latest look, her ABCD co-star Varun Dhawan commented with her father's iconic dialogue from his 1984 film Tohfa to compliment her irresistible beauty.

The duo was last seen together in ABCD 2 and Street Dancer 3D will be the third instalment in the film's franchise. Both Shraddha Kapoor and Varun Dhawan have evolved since their last film together, both as dancers as well as performers. As for Street Dancer 3D, the two stars will be seen taking it to the next level. For the unversed, Katrina Kaif was reportedly the first choice for the film, but as luck had it, the film eventually went to Shraddha Kapoor. Directed by Remo D'Souza, Street Dancer 3D also stars Aparshakti Khurana and Nora Fatehi in pivotal roles. It is slated to release on January 24 and clash with Kangana Ranaut's Panga.

Also Read | Not Shraddha Kapoor, But THIS Actor Was The First Choice For Remo D' Souza's Street Dancer