Varun Dhawan recently uploaded this throwback video on his Instagram. Have a look at why Jacqueline Fernandez had a reason to complain. Details inside.

Actor Varun Dhawan recently put up a throwback video on his social media. His pal Jacqueline Fernandez had the quirkiest comment regarding it. She jokingly accused him of cutting her off from the fun video.

Bollywood actor Varun Dhawan recently put up a fun video on his official Instagram handle. He is seen skiing in the video, which is reportedly from his New Year vacation. On this post, Jacqueline Fernandez decided to point out that she has been cut out of it. In the comments section, she has written that Varun has totally cut her out of the video. She has also added a laughing emoticon at the end of the comment, implying its hilarious nature. Varun Dhawan did not shy away from replying to the comment either. He replied by commenting hat he will post her contributions to the video in a few weeks. He has also added a “haha” at the end of the comment. 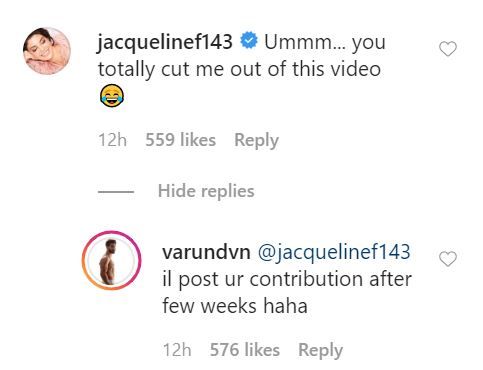 Varun Dhawan was recently seen in the film Street Dancer 3D. In the film, he plays the role of an Indian dancer. The film is directed by Remo D’Souza and also stars Shraddha Kapoor and Dharmesh in key roles. The film has been receiving mixed reviews from the audience. Have a look at few of the reactions here.

Honestly I didn't expect a solid script from this film.But it surprised me and how!!!Every emotion was conveyed beautifully. #StreetDancer3D

#StreetDancer3D is well intentioned film, celebrates humanitarian work by S.W.A.T .One may not like the film but indulging in hate marketing campaign to change the narrative & intentions of the film is absolutely shamefull.Apni film mein bharosa hota toh aisa kaam na karte.👎🏻👎🏻👎🏻

Don't know how is the movie #StreetDancer3D
All I know is the people in it or associated with it are amazing. Be it Varun, Shraddha, all the dancers Dharmesh, Punit, Raghav, Salman and most importantly the director Remo❤️ They all are such good people!