Raazi was one of the most memorable performances of actor Alia Bhatt in 2018. The movie also featured Vicky Kaushal in the lead role. The Alia Bhatt-Vicky Kaushal starrer Raazi clocks two years today in the film industry. Vicky Kaushal took to Instagram to share a picture of the film completing two years.

Vicky Kaushal shares the promo image of the film. In the picture, Alia Bhatt can be seen holding the gun pointing at the camera. Alia also looks scared as she holds the gun in her hands. Below here are silhouettes of a few men and they seem to salute a flag. Along with the picture, the post also read as “Two years of Raazi.” Check out the post below. 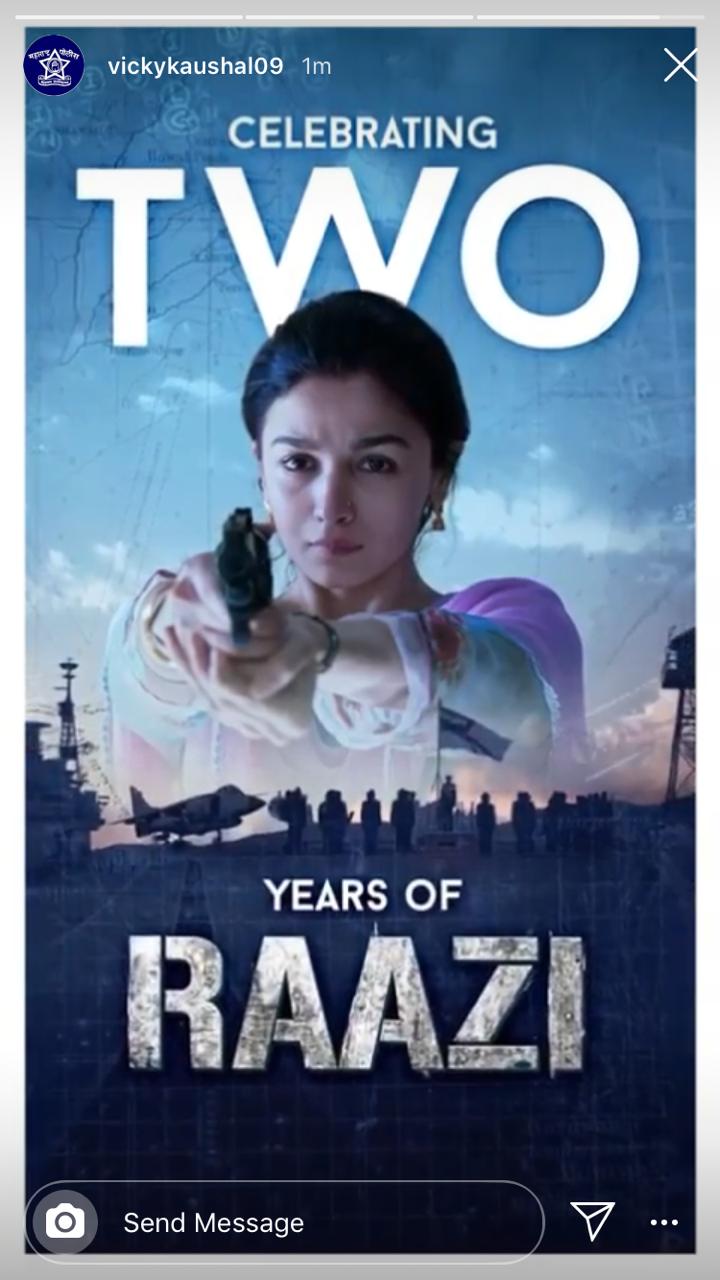 Inspired by an Indian spy Sehmat Khan's true story, the film Raazi is adapted from a novel by Harinder Sikka titled Calling Sehmat. During the release, this Alia Bhatt starrer became one of the best movies. The film's plot tells the story of a RAW agent who is risking her life in Pakistan as an informant for India. The film is about a young woman from Kashmir who marries a Pakistani military official, and she has to find out with great care and smartness about a danger that is looming big on India.

The film was lauded by fans, movie buffs and movie critics and also made it big at the box office. The film, Raazi also went on to receive several accolades for various categories including Best Actor, Best Film, Best Song, Best Supporting Actor and much more. Check out the trailer of the film here.

Vicky Kaushal was last in Bhanu Pratap Singh’s Bhoot: Part One - The Haunted Ship. The film received a mixed reaction from fans and movie buffs. The actor will next be seen in Shoojit Sircar’s Udham Singh. The film also stars Stephen Hogan in a lead role. The film is based on the Biopic of Sardar Udham Singh. The film is expected to hit the silver screens on January 15, 2021, but the film might get pushed for another date due to the current situation.

Also read | Alia Bhatt's 'Raazi' Was Her 8th Film With Dharma; Here's Some Other Trivia About The Film

PEOPLE HAVE PLEDGED SO FAR
LATEST NEWS
View all
1 hour ago
Amitabh Bachchan's pictures with 'Brahmastra' co-stars are unmissable
16 mins ago
Vaani Kapoor had the classiest reply to a troll who called her 'ugly'
1 hour ago
Ananya Panday joins Bhumi Pednekar's 'One Wish For The Earth' campaign
1 hour ago
Anupam Kher celebrates 39 years in entertainment industry, launches his own website
38 mins ago
Nushrat Bharucha shares video of her cat watching rain, gives a sneak peek into her home