Vijay Deverakonda and Ananya Panday get clicked alongside the crew members of the upcoming film 'Fighter'. The duo smiles brightly as they pose together. Read.

Telugu actor Vijay Deverakonda recently announced his Bollywood debut with Pati Patni Aur Woh actor Ananya Panday. He took to his social media and revealed that the duo will be starring in a pan India film titled Fighter. While many behind the scene pictures from the shooting of the film were leaked, the crew members of the film have also shared a few pictures with Vijay Deverakonda and Ananya Panday recently.

Indian film producer and former south Indian actor Charmme Kaur recently took to her social media and shared a few pictures from the behind the scenes of Vijay Deverakonda and Ananya Panday’s film. Bollywood film producer Karan Johar also posted a picture of the duo on his Instagram story and mentioned that the duo is all set to explode on the screen very soon. Check out the pictures of the actors that have surfaced online. 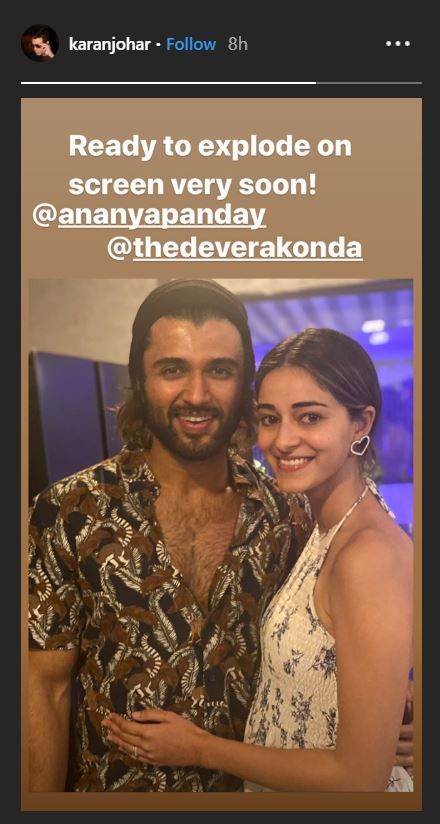 In the picture shared by Karan Johar, Vijay Deverakonda can be seen sporting a printed shirt and he paired it with a pair of dark coloured pants. He wore a dark coloured beanie to complete the look. He is seen holding Ananya Panday who looked gorgeous in a white coloured mini dress. Ananya Panday is seen donning a white coloured mini dress with a floral print and a halter neck neckline.

The Student of the Year 2 actor wore a pair of heart-shaped earrings and completed the look with a pair of white coloured boots. In another picture shared by Charmee Kaur, Ananya Panday and Vijay Deverakonda are seen posing for the lens along with the crew members of their upcoming film Fighter. The duo is all smiles as they pose alongside each other.

According to reports, the movie- Fighter will star Vijay Deverakonda, Ananya Panday, Ronit Roy, and Ramya Krishna in pivotal roles. Puri Jagannadh is credited for directing the Vijay Deverakonda and Ananya Panday’s film as well as producing it with Charmme Kaur, Karan Johar and Apoorva Mehta.