Viral Pics Of Ranbir-Alia, Kartik-Janhvi & Kiara That Grabbed All Eyeballs This Week

Several pictures of fan-favourite Bollywood stars went viral this week. From Ranbir Kapoor-Alia Bhatt's Ranthambore safari pics to Katrina Kaif deleting alleged Vicky Kaushal's pic from her social media, from Kartik Aaryan and Jahnvi Kapoor twinning in white to Kiara Advani's bikini pics from the Maldives, all of these Bollywood's viral photos were trending this week. Take a look.

Bollywood actors Ranbir Kapoor and Alia Bhatt brought in their New Year with both of their families in a trip to Ranthambore National Park. Many videos were shared by celebrity photographer Manav Manglani, featuring both their families. Even Ranveer Singh and Deepika Padukone joined the duo in the middle of their New Year-end celebrations in Rajasthan. Check the pics of Ranbir and Alia from their trip to Ranthambore along with Neetu Kapoor, Soni Razdan, Shaheen Bhatt, Riddhima Kapoor with her husband and daughter too. Here are some of the pics of the Bollywood's 'it' couple along with their family members.

Katrina Kaif apparently shared a picture with her sister Isabelle on her Instagram stories on January 2nd. However, in a few minutes, she removed this picture. The main attention in this pic was that as the sisters were playing a board game, the glass behind them showed a reflection of Vicky Kaushal, according to the fans. Katrina and Vicky are already amongst media attention after rumours of the duo dating spread a while ago. It was also speculated that the duo spent their New Years 2020 together in Alibag as well. However, none of these speculations has been confirmed as of yet.

Kiara Advani also ringed in her New Year in the Maldives. She was staying at Soneva, Maldives and shared a few posts from her trip as well as some pics from her Instagram stories as well. Her rumoured beau Sidharth Malhotra was also spending the New Years at Soneva, Maldives as well. Even though the duo didn't post any pics of them together but they both shared the posts from the same location, which was enough for their fans to speculate about the duo. Sidharth and Kiara’s relationship rumours emerged while the duo was paired for the film Shershaah and started shooting together. The movie is based on the life of Param Vir Chakra army captain Vikram Batra. Here are some of her posts and Instagram story images from her social media account. 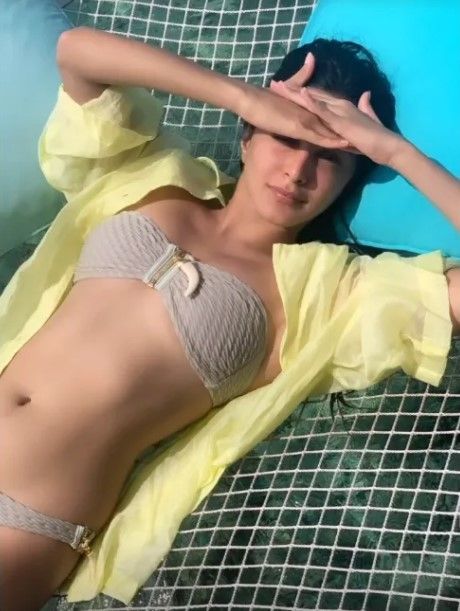 Kartik Aaryan and Jahnvi Kapoor gathered massive attention when the duo headed to Goa together before New Years. However it wasn't clear whether the duo was on a trip due to their film shooting or was simply celebrating their New Years together, but the fans were very much excited to see the duo together. They were even clicked together twinning in white in a location in Goa. The duo will feature together in upcoming movie Dostana 2.