Anushka Sharma recently shared a glimpse of her living room watching Paatal Lok. The actor's fans went gaga over the pic as they spotted a cute wedding portrait

Anushka Sharma has finally made her digital debut with the web series Paatal Lok. The actor’s web series premiered on Amazon Prime recently. Anushka Sharma, on May 14, 2020, shared a picture on her Instagram handle where she is seen watching her own series. However, the interesting thing about the picture was a portrait that was kept in her living room.

Anushka Sharma shared a glimpse of her living room where she is seen sitting in front of her television watching Paatal Lok. As soon as the actor shared the picture, her fans started pointing out a portrait from Virat Kohli and Anushka Sharma’s wedding. A sketch where Anushka Sharma and Virat Kohli were seen making funny faces was spotted in the picture. This sketch was kept on her TV slab with two male and female superhero figures kept on either side of the portrait. Anushka Sharma’s post has a quirky caption too. She wrote, “Sab lok ke sab log ab dekh rahe hai #PaatalLok. Go watch. “.

Fans flooded the comment section with compliments for Virat Kohli and Anushka Sharma’s wedding portrait. Jacqueline Fernandez also commented on the picture, “That cute wedding caricature!!” One of the users commented, “The photo below the TV set ðŸ˜â¤ï¸â¤ï¸â¤ï¸” Another commented, “Shaadi ka tasveer mast hai (the wedding picture is awesome).” 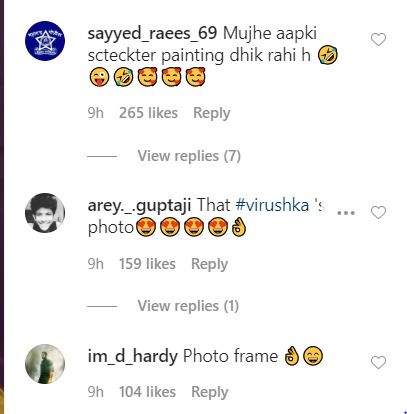 Paatal Lok features Jaideep Ahlawat, Neeraj Kabi, Swastika Mukherjee, Gul Panag, and Abhishek Banerjee in the lead roles. Paatal Lok is believed to be a cop based crime drama. However, even though Anushka Sharma is producing the show under her banner Clean Slate Films, she will not be starring in the show. NH10 writer Sudip Sharma has created Paatal Lok. The show is said to be an investigative thriller that also shows the reality of modern-day Indian society and politics. Reportedly, Paatal Lok is adapted from Tarun Tejpal’s novel The Story of My Assassins.