This time Diet Sabya's victim is the Bollywood music director, Vishal Dadlani. Read on to know what this Instagram page has to say about the celeb's outfit

An Instagram page called Diet Sabya seems to be making life difficult for Bollywood designers. The user of the account finds copied outfits by Bollywood designers from international brands and calls them out on his page. It even brutally adds the hashtag #GandiCopies. Many Bollywood celebrities have become a victim to its cruel trolls including Rhea Kapoor, Sonam Kapoor ad Aishwarya Rai Bachchan. Recently, however, it was the Bollywood music director, Vishal Dadlani who fell victim to Diet Sabya.

On the Instagram story of Diet Sabya shows a picture of Vishal Dadlani wearing a ShantanuNikhil creation for the reality show Indian Idol on which he is a judge. The post seems to have been copied from someone's Instagram story. Diet Sabya shared it on his story and added the caption, "this is a #gandicopy of @shantanunikhil". 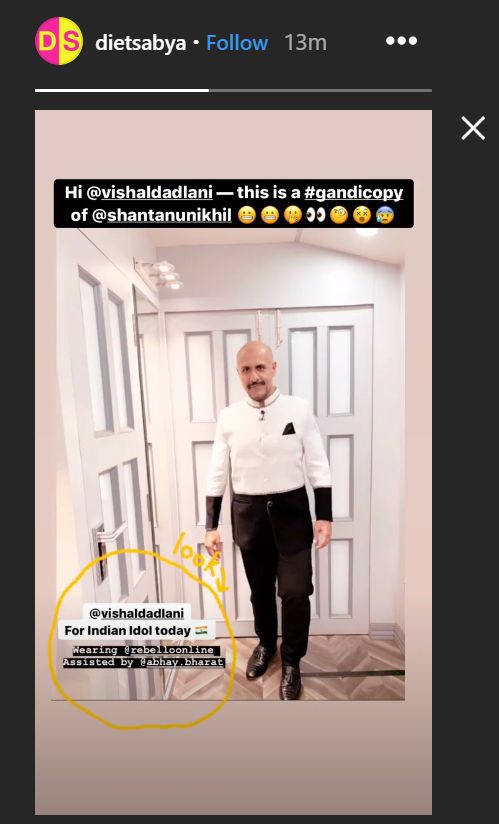 Diet Sabya has previously trolled many Bollywood celebrities on its page. It called out Janhvi Kapoor's outfit for some award function for being a copy of the international brand Mihanomomosa. Diet Sabya had messaged the brand asking them if it was their design to which the brand reverted back saying it was a "copy" of their outfit. The page has also played a joke on Shraddha Kapoor likening her outfit to digestive medicine and many more.

Recently, Vishal Dadlani reportedly landed in a controversy for his tweet. He made a contentious statement on former CJI Ranjan Gogoi. In the tweet shared by Dadlani, the music director has targeted the former CJI, terming his legacy as disgraceful and cowardly. But this did not go down well with netizens who called out Dadlani for his Twitter post. They even went on to say that Vishal Dadlani should not be a part of Indian Idol anymore. However, fans came to his rescue and asked if ex-judges of the show would come to the rescue of Dadlani.

PEOPLE HAVE PLEDGED SO FAR
Amitabh Bachchan and other Bollywood celebrities wish their fans on Hanuman Jayanti
Sonakshi Sinha pens a stern message for those abandoning their dogs amid COVID-19; Read
Arjun Kapoor's sassy replies to sisters Sonam & Janhvi are all things hilarious
Rakul Preet launches Youtube channel with 'all things fun',says revenue will go to PM Fund
Kriti Sanon says, 'I'm in Love', actor reveals through a picture; See here
DO NOT MISS
LOCKDOWN TO BE LIFTED IN PHASES?
93 NEW MARKAZ CASES IN DELHI
BS YEDIYURAPPA ON LOCKDOWN
UP TO SEAL 15 DISTRICTS
ASHISH NEHRA ON YUVRAJ SINGH
BERNIE SANDERS SUSPENDS CAMPAIGN