Vicky Kaushal's recent social media post not only earned him thousands of likes, but also a nickname from Bollywood peers Varun Dhawan and Arjun Kapoor.

Bollywood actor Vicky Kaushal, who was last seen Karan Johar's Bhoot: Part One - The Haunted Ship, has always amused the audience and fans with his behind the scenes photos and videos. But due to the novel Coronavirus COVID-19, he and other Bollywood stars are locked down in their homes. Amid this, Vicky Kaushal has been giving a sneak peek to his fans and followers into his self-quarantine. But it seems like in return he has got a new name from Bollywood, which is Peeky Kaushal.

Interestingly, on Sunday, Vicky Kaushal shared a picture of himself on his social media feed. Vicky is seen sporting a casual look in a white t-shirt. Enjoying the self-quarantine, he gave a quirky pose for the camera. Instagramming the selfie, he wrote a caption that read, '#StayHome #StayPositive 🙂✌🏽'. Apart from his fans, the picture also grabbed the attention of a few Bollywood stars including Varun Dhawan and Arjun Kapoor.  Take a look of the picture before knowing what Bollywood stars have to say about it: 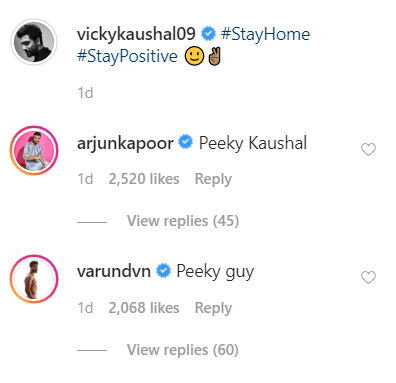 READ | Vicky Kaushal Has Had A Great Career So Far, Take A Look At The Actor's Career Graph

What next in Vicky Kaushal's kitty?

The Uri actor will next soon essay the character of a freedom fighter Udham Singh. The shooting of the film is done, and it is slated to release on January 15, 2021. Apart from the biography-drama, he will also play a pivotal role in Dharma Production's upcoming multi-starrer flick, Takht.

READ | From Katrina Kaif To Vicky Kaushal, Actors Draw A Workout Plan While In Self-isolation