Back in 2019, Ileana D'Cruz took to Twitter and shared that she sleep-walks and wakes up with mysterious bumps. Here's how netizens reacted to her confession.

Back in 2019, Ileana D’Cruz took to Twitter and confessed that she sleep-walks in the night. "I’m almost entirely convinced that I sleep-walk. Almost. Maybe. Probably," she tweeted. Not only this, but the actor also made another confession that left her fans worried. Ileana mentioned that "she wakes up with mysterious bumps and bruises on her legs". As soon as Ileana D'Cruz's tweet was up on the internet, netizens rushed to drop their opinions on it.

When Ileana confessed that she sleep-walks

A user asked, "Are you ok?" followed with a sad emoticon, whereas another fan penned, "Take care, see a doctor". Many also had hilarious reactions to Ileana's confession. "Could be demon possession #conjuring," wrote another user. "As long as people around you don’t wake up with bumps and bruises ... it should be fine," tweeted a fan. 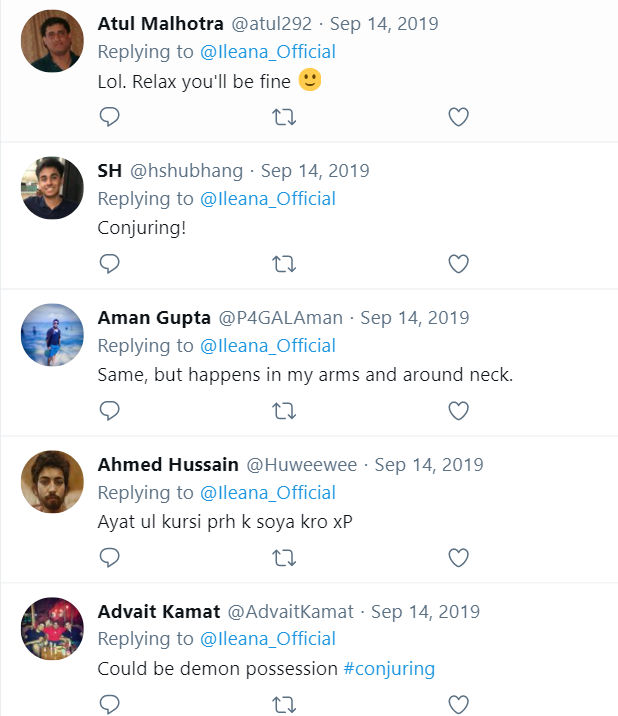 Also Read | Jeremy Renner's Birthday: Here Are Some Of His Best Scenes As Hawkeye; Check Out

Recently, Ileana took to Instagram and shared a vintage selfie of herself. For the New Year, the actor remarked that she did not want to give big speeches and also did not want to talk about tall claims. She added that she's just going to flow. "Bring it on 2021," she wrote in her caption. The actor is quite active on social media and often shares glimpses of her personal and professional whereabouts.

On the work front, Ileana wrapped up shooting for her upcoming outing, Unfair and Lovely, starring Randeep Hooda in the lead. The entire team of the film was in Haryana and the lead stars took to their social media handles and penned heartfelt notes. Randeep, Ileana posed for selfies and shared some BTS moments. "Lovely will miss working with this crazy amazing crew! Can’t wait to leave you all laughing with this story!", wrote Ileana.

Apart from this, D'Cruz also has The Big Bull, co-starring Abhishek Bachchan, in the pipeline. The film is directed by Kookie Gulati and is slated for a digital release on Disney+Hotstar. However, the film's release date is not announced yet. The Big Bull will follow the story of Harshad Mehta's scam in the world of finances and banking.