Yami Gautam entertained fans with two superhits in 2019 that is URI: The Surgical Strike and Bala. Here's a cute video of the actor interacting with a kid.

Yami Gautam has been spending her lockdown by brushing up on her baking skills and sharing throwback pictures. Recently, the actor shared a video where she is seen interacting with a cute little fan after Bala promotions. Have a look.

Yami Gautam shared an Instagram story in which she is seen talking to a little kid. In this video, Yami Gautam is seen sitting and holding a hand of a cute little kid while they have a conversation. The kid seems excited while Yami Gautam is seen meeting her with a wide smile on her face. She posted the video and wrote, “I remember conversing with this girl after Bala promotions”. Yami Gautam is seen wearing a beautiful brown ensemble with black print over it. Her look is kept minimal with nude makeup and open hair. 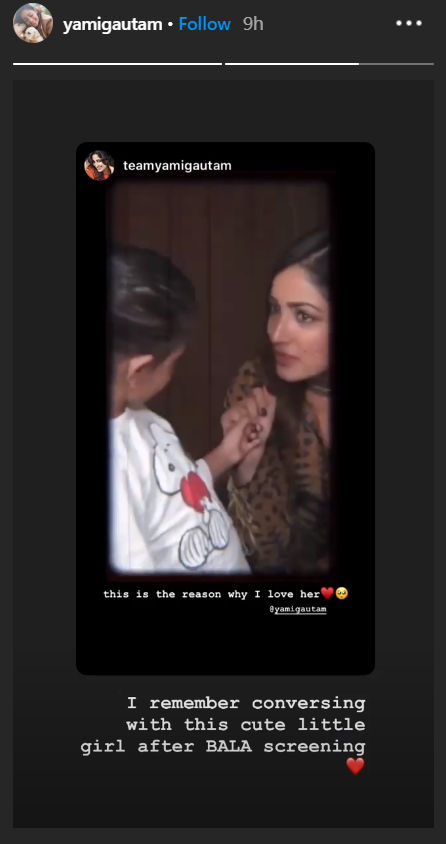 Talking about the professional front, in 2019,Yami Gautam entertained fans by playing a pivotal character in Vicky Kaushal's Uri: The Surgical Strike. Yami Gautam performed the role of an undercover intelligence agent in the movie. Her performance was critically praised. Upon release, the film received mixed reviews and emerged as one of the highest-grossing films of 2019.

Later, in November 2019, she joined the lead cast of Amar Kaushik's Bala  Yami Gautam was featured alongside Ayushmann Khurrana and Bhumi Pednekar in the lead. Bala, a social problem comedy film was directed by Amar Kaushik, written by Niren Bhatt, co-written by Ravi Muppa, and produced by Dinesh Vijan. It is based on an original story by Bengali film director Pavel Bhattacharjee about the life of Rohit Sood.

In Bala, Ayushmann Khurrana stars as the titular character, a young man living in Kanpur who is suffering from male pattern baldness, and the story is about his lack of confidence and the societal pressure that comes with premature balding. Another theme in the film is colourism. Yami Gautam plays the role of Ayushmann Khurrana's love interest in the movie.

Apart from these, she will be next seen in Puneet Khanna's Ginny Weds Sunny. The upcoming rom-com is reported to be in the post-production stage. It is expected to hit the silver screens in 2020.

Also Read| Parineeti Chopra to Yami Gautam: List of actors who opted for a digital detox