Dia Mirza took to Instagram to share a picture of herself from her childhood where she can be seen sanding a piece of furniture. Here is her post

Actor Dia Mirza who is quarantining in her house in Mumbai recently shared an adorable memory from her childhood when she used to help her father with housework.

Dia Mirza shared a picture of herself as a cute little baby as she sits in between what looks like a piece of corner furniture. She is looking up at someone as a goofy smile is plastered on her face with a little tongue poking out. She also has sandpaper in her hand. In the caption of the post, Dia Mirza tagged her mother. She said that she is sanding her father’s furniture. She also added that the photo reminds her of all those times when they had to sandpaper and polish the tables by her bedside. Here is her post:

Actor Yami Gautam and producer Ronnie Lahiri added heart emojis in the comments section. Dia Mirza’s fans were all praises for the adorable picture. They pointed out how she looked very cute and adorable in the picture. One of the fans even called her a ‘doll’. Another fan claimed that she has been cute since her childhood. 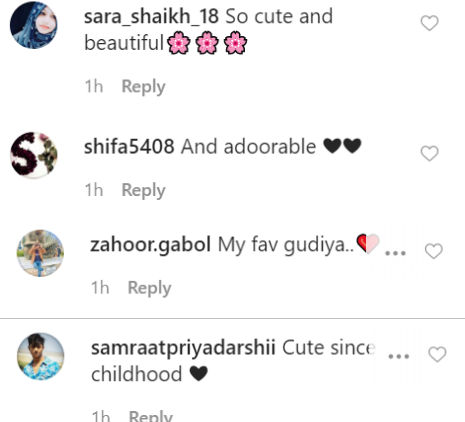 Dia Mirza recently shared several memories of her childhood on Instagram. The actor had shared an adorable picture of herself some time back. The photo shows her gleeful face as she claps looking at something. Her hair is tied up in two little ponytails. In the caption of her post, she claimed that the old photographs she has are her most priceless possessions. She also shared that the photo was taken by her father.

Dia Mirza shared a picture of herself participating in various plays on the occasion of World Theatre Day. She shared two pictures of herself in various costumes. Dia shared that she, along with her classmates, used to write plays in English, Hindi and Telugu. In the first picture, Dia can be seen dressed up like a peacock. The play was about a forest and how the animals stay together. She also shared another picture in which she participated in a play. She revealed that the play was about a wondrous sea. She played the part of a mermaid. Here are the pictures:

PEOPLE HAVE PLEDGED SO FAR
LATEST NEWS
View all
6 hours ago
Aamir khan mourns the death of hockey star balbir singh sr
7 hours ago
Siddhant chaturvedi's reply to a comment on his instagram post wins the internet
5 hours ago
Vidya balan's debut production 'natkhat' to premiere in digital film fest on june 2
8 hours ago
Sussanne khan reflects on 9 years of charcoal, says 'single experiment can prove me wrong'
6 hours ago
Esha gupta had sent house help on leave before lockdown, says 'relieved she’s with family'