At the 92nd Oscars 2020 after-party, English singer-songwriter Adele made quite the entrance as she looked 'unrecognisable' and 'probably' dropped '30kg'.

At the 92nd Oscars 2020 after-party on February 9 English singer-songwriter Adele made quite the entrance as she looked 'unrecognisable' and 'probably' dropped '30kg'. Polish television presenter, Kinga Rusin took to Instagram following the event and stated her disbelief at the singer's weight loss. Rusin also captioned the post saying that she 'didn't recognise' Adele because of the singer's seven stone weight loss.

In the caption, Rusin wrote, “At yesterday's private party by Beyoncé and Jay-Z, I talked to Adele about ... shoes (Adele in the photo after dropping probably 30kg!) I know that sounds surreal. But listen from the beginning ... It started with a conversation with Adele about my high heels. Honestly, I didn't recognise her because she is so thin now!”

READ: Adele Loves The Black And White Instagram Filter! THESE Pics Are Proof 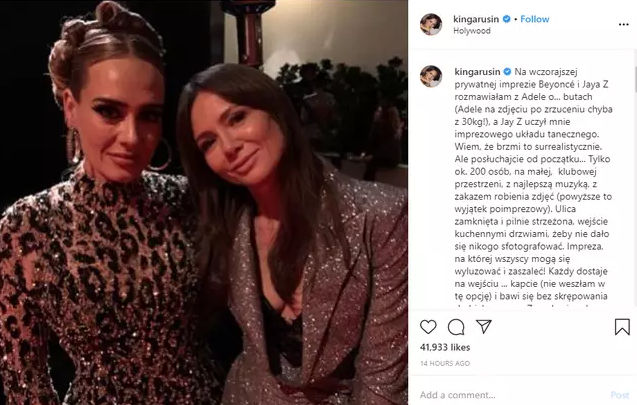 READ: Adele's Former Trainer Camila Goodis Believes THIS Is The Reason For Her Weight Loss

According to international media reports, Adele recently adopted a healthier lifestyle, following her split from husband Simon Konecki, last year. The 31-year-old's whole focus during the weight loss journey has been all about how she can be healthier and how she can treat her body better. Adele has reportedly also cut down on drinking and is now eating more of healthy food. She also loves her physical transformation and she is also more confident, dresses differently and just happier overall.

While speaking to an international media outlet, Adele's pilates instructor Camila Goodis said that the singer did change her lifestyle, ate better and exercised moderately. Heather Struhl who is a registered dietician and physician told the magazine that Adele’s weight loss seemed to be a gradual process. During Christmas last year, Adele was also pictured with Harry Styles in Anguilla, when she reportedly even shared details about her weight loss journey with a fan.

PEOPLE HAVE PLEDGED SO FAR
Kim Kardashian, Kylie Jenner and other family members' million-dollar homes
Elisabeth Moss reveals what she would do if she was invisible for a day; read
Sophie Turner used no hand, no cutlery technique to cut her birthday cake; see pics
Nick Jonas' debut as judge on 'The Voice' will only add to his total net worth; read
Women changed 'course of history' with Weinstein sex crimes trial: top prosecutor
DO NOT MISS
TRUMP & MUKESH AMBANI INTERACT
DELHI: CBSE BOARD EXAMS POSTPONED
TRUMP EVADES DIRECT RESPONSE ON CAA
AFFIDAVIT IN SC ON DELHI VIOLENCE
MALANG BOX OFFICE COLLECTIONS
RAHMAN, KHANNA ATTEND PREZ'S DINNER