Ariana Grande recently took to social media to call people out for being selfish & not taking Coronavirus seriously. Read to know what more she has to say.

Ariana Grande recently took to her social media proving that she is not one of those people who takes the Coronavirus as a joke. As much as people insist that the COVID-19 is an overhyped flu, the fears of it are real, according to her. The singer took to her social media and said that it is surprising that so many people go around believing that the virus is not that big of a deal. That is not all, Grande has much more to say.

“well some of us have to work!”
i understand and entirely support your frustration. i do not mean to disrespect anyone who doesn’t have the privilege of cancelled work or being able to call out of their work. but, this is a national emergency and a pandemic of global proportion.

She also received a lot of backlash for her statement. Continuing into the same thread, she clarified that she does not mean to disrespect anyone and entirely understands that there are people who do not have the privilege of canceled work. She further insisted on the fact that it is a national emergency and a pandemic of global proportion.

i am agreeing w yall. these are the times when the world should rely on their governments to support the plan for all citizens to stay at home and lessen the threat of infection and the spread of the virus.

ALSO READ | How Ariana Grande Reacted After Pete Davidson Got Candid About Their Breakup; Read 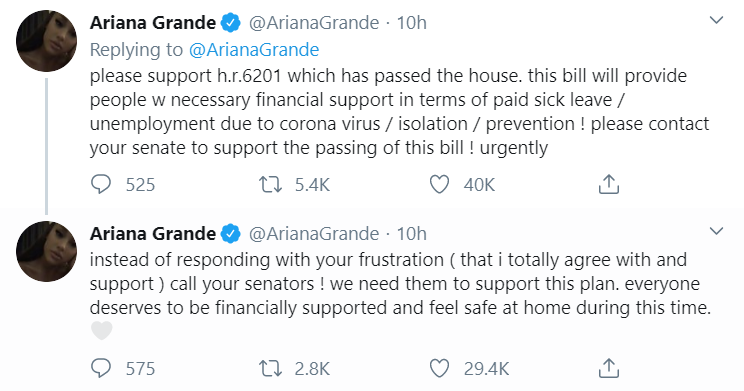 Once again trying to make her fans realise the urgency of the situation, she urged them to call their senators for support. She also mentioned a bill in her tweet which provides people with necessary financial support and leaves. In another tweet she added that everyone deserves to be financially supported and feel safe at home.

PEOPLE HAVE PLEDGED SO FAR
Pete Davidson says it was 'over' with Ariana Grande after her ex-BF Mac Miller's death
How Ariana Grande reacted after Pete Davidson got candid about their breakup; read
Ariana Grande and Mikey Foster split after 9 months of dating, here's the reason
Katy Perry's pregnancy, Ariana Grande's breakup and other Hollywood updates of the week
Covid-19 lockdown: Quarantine challenges that have trended so far on social media
'Black Widow' starring Scarlett Johansson will not be released on Disney+, here's why
Ariana Grande ask fans to 'get a load' of her curly hairdo in throwback post
DO NOT MISS
NIA TO PROBE KABUL TERROR ATTACK
MP CM SHIVRAJ CHOUHAN ON ATTENDEES
ARVIND KEJRIWAL ANNOUNCES EX GRATIA
DELHI POLICE WARN AGAINST FAKE NEWS
NIZAMUDDIN CONGREGATION ATTENDEES
WIMBLEDON 2020 CANCELLED