Bella Hadid Gets An Apology From Instagram's Parent Company On Her Dad's Birthplace Post?

Recently, a leading news portal reported that the photo-sharing platform, Instagram, has apologised to supermodel Bella Hadid for removing the story that she had shared of her father Mohamed Anwar Hadid's passport with his birthplace listed as Palestine. Earlier this week, Bella shared screenshots of her father's passport on her the story session of her handle and subsequently posted the message that she received from Instagram with respect to the removal of the post.  According to the report, Instagram's parent company Facebook issued an apology to Bella in a statement and said that it was a "mistake".

READ | Gigi Hadid & Bella Hadid Are Making Their Own Lavender Maze, Here's How You Can Do It Too

The report stated that to protect the privacy of our community, the platform does not allow people to post personal information, such as passport numbers. The report further added that in Bella Hadid's case, the passport number was blurred out, so this content should not have been removed. The report informed that Instagram has restored the content and apologised to Bella for the mistake.

Supermodel Bella Hadid made headlines on July 8 after she criticised Instagram for removing her post and said in her stories, "Instagram, exactly what part of me being proud of my father's birthplace of Palestine if 'bullying, harassment, graphic or sexual nudity'? Are we not allowed to be Palestinian on Instagram? This, to me, is bullying. You can't erase history by silencing people. It doesn't work like that."

READ | Bella Hadid & Gigi Hadid's Claim To Fame: All You Need To Know About Their Modelling Journey

She also wrote, "I am proud to be Palestinian. Everyone should post where their mothers and fathers were born today! Remind them how proud you are of where you come from". Bella's sister Gigi too reposted the story and mentioned that she too is proud to be part of where she is from. Gigi Hadid added a huge Proud sticker to the story re-shared by her and thus hinted at her support.

Soon Mohamed Hadid, father of Bella and Gigi Hadid, also took to Instagram to share the picture of his passport. He, however, did not upload the picture on stories but rather did it on his feed instead, sending out a strong message. Since then, several people who belong to Palestine have shared pictures of their birthplace and Bella Hadid has re-shared a couple of pictures. 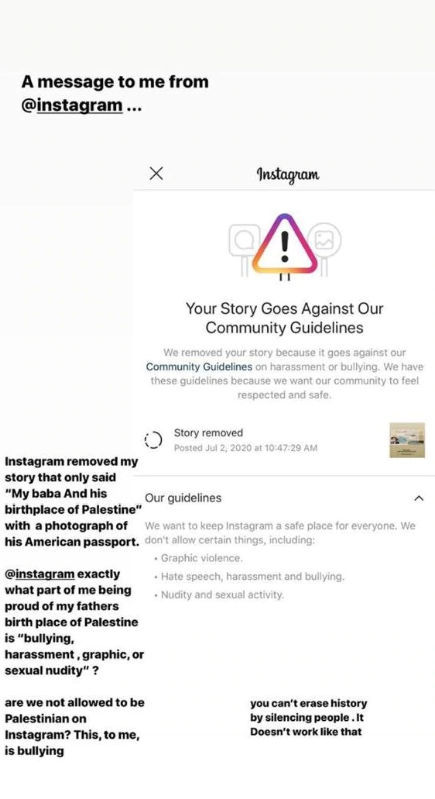 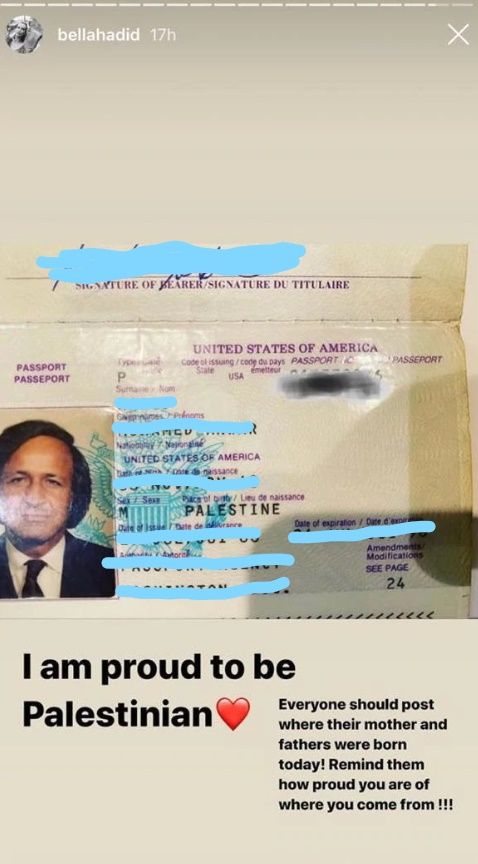 LATEST NEWS
View all
4 hours ago
Meghan Markle's Birthday: Here are 10 most impactful quotes by the Duchess of Sussex
5 hours ago
Kanye West picks 'Biblical Life Coach' Michelle Tidball as his Vice President candidate
4 hours ago
Vishal Bhardwaj's songs where singer's vocals are used instead of musical instrument
2 hours ago
As Kourtney Kardashian marvels fans with a yellow bikini, here are some more trendsetters
3 hours ago
Universal Pictures backing a space film project proposed by Elon Musk & Tom Cruise?