On the occasion of her 24th birthday, model Bella Hadid shared a video on her social media handle, in which she was seen recreating a viral KUWTK scene. Watch.

While celebrating her 24th birthday on October 9, American model Bella Hadid gave a good laugh to her 34.2M Instagram followers with a fun video. Interestingly, Bella was seen recreating a scene from the latest episode of Keeping Up With The Kardashians. In the video clip, Bella was seen lip-syncing Kylie‘s part: “Cause I’m gonna get wasted. I just finished a whole cup of 42 and I’m about to go for my second one. Kourtney, what the f--k are you on?”.

Aas the video progressed further, her friend took over Kourtney's part, and said, “I don’t know what’s going on, so I’m just appreciating my bread". In the caption of the post, Bella tagged Kylie Jenner. Scroll down to watch Bella's video.

So far, the video has garnered more than 10M views; and is still counting. Meanwhile, Kylie took to the comments section and reacted to Bella's video. Kylie called it “iconic,” along with three laughing and crying faces. On the other side, KUWTK alum Khloe Kardashian also replied to the video and wrote, “HHahahahahaha I am dead". 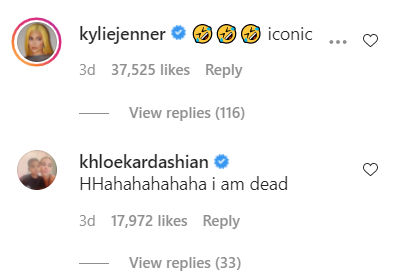 READ | Bella Hadid's Birthday: How Well Do You Know The Supermodel? Find Out With This Quiz

Interestingly, not only Bella but new parents Joe Jonas and Sophie Turner also recreated the scene recently. In their video, Turner took on the role of Kylie, using her water bottle in place of tequila while in Kourtney's part, Jonas was seen eating what seems to be a cup full of frozen yoghurt. To caption his video, Jonas wrote, "WaAaSsSstEDDDD".

Keeping Up With The Kardashians

The moment took place during the family's dinner at the Palm Springs trip in KUWTK's latest episode. Kylie had ordered her favourite Don Julio 1942 tequila, asking for "42 on the rocks and ginger ale". After placing her order, Kylie spontaneously started singing a song, "Cause I'm gonna get wasted. I just finished a whole cup of 42 and I'm about to go for my second one".

Tequila on the rocks, Kylie’s drink of choice

On the other side, recently, the family announced that they were putting an end to their long-running reality show. Meanwhile, reacting to the same, Khloé Kardashian said that the decision to stop filming is 'devastating' and admitted she isn't 'good with change', during an appearance on the new hit podcast Emergency Contact. Back in October 2007, KUWTK started premiering on E!. The 20th season of the show is set for a 2021 release.