Bella Hadid who had recently followed Selena back has unfollowed Selena Gomez again. The reason is yet unknown. Read here to know what happened in detail

Selena Gomez and model Bella Hadid started following each other on Instagram again on May 4, 2020, after mutually unfollowing each other in 2017. After their feud in 2017, Selena Gomez had started to follow Bella's sister Gigi Hadid on Instagram in November 2019, and Bella Hadid finally followed Selena again but unfollowed her one day after following her back again. Read ahead to know more. Read Also | Gigi Hadid & Bella Hadid Are Making Their Own Lavender Maze, Here's How You Can Do It Too

On the other hand, Selena Gomez is still following Bella Hadid on her Instagram. Selena follows about 117 people, one among which is Bella. take a look at Selena's following list here. 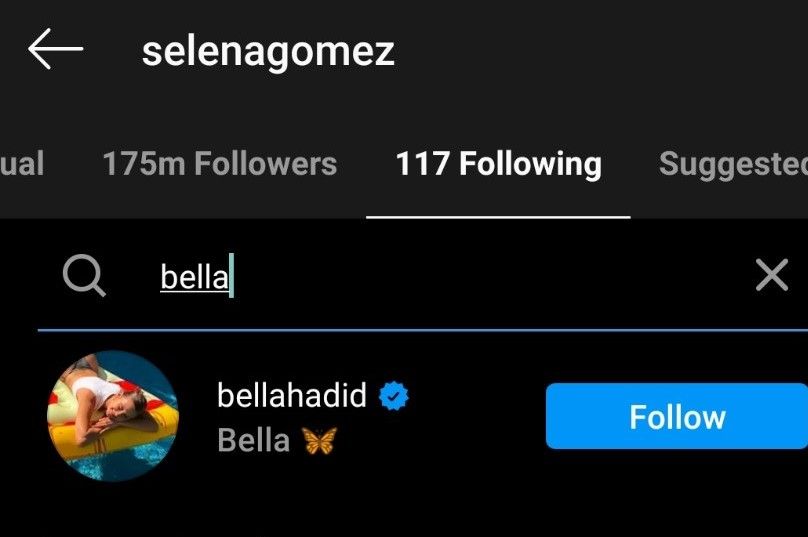 Both Selena Gomez and The Weeknd dated until October 2017. After they broke up, The Weeknd again started to date Bella Hadid in the spring of 2018. But the relationship did not last long and they broke up for the second time in august of 2019. Selena has refollowed Hadid in November of 2019. Hadid didn't follow back then, but she did like a photo on Gomez's Instagram in February 2020.

After this, it was reported that Selena Gomez and Bella Hadid had major Instagram drama. It was reported that Hadid has deleted a post on which Gomez had left a supportive comment. After this, one of Gomez's fans accounts pointed out that Hadid has deleted the post. After which Selena Gomez commented on the fan account by writing "That sucks". Gomez later clarified that what happened between them was all a misunderstanding. She also urged fans not to harass Hadid.

PEOPLE HAVE PLEDGED SO FAR
LATEST NEWS
View all
6 hours ago
Dwayne johnson's highest rated movies according to imdb; see list here
6 hours ago
Doja cat apologises for 'offensive' title of old track, but denies racist comments
8 hours ago
Kourtney kardashian shares throwback pic from a trip, calls it an 'escape to the desert'
10 hours ago
Kylie jenner's skincare range to make its debut in the european market soon
8 hours ago
Chrissy teigen gives it back after being trolled for “balding hair”