Cara Delevingne recently took to her social media to defend her ex Ashley Benson amid rumours of Ashley's romance with G-Eazy. Read more to know about it

According to various media reports, Hollywood actors Cara Delevingne and Ashley Benson have parted their ways. The couple were in a relationship for about two years. The reasons for their break are not known but it is reported that the couple called it quits in Aril this year. After her break up, Ashley Benson is rumoured to be romancing rapper G Eazy. Recently, Cara Delevingne took to her Instagram to defend Ashley Benson following the rumours of her romance with G Eazy. 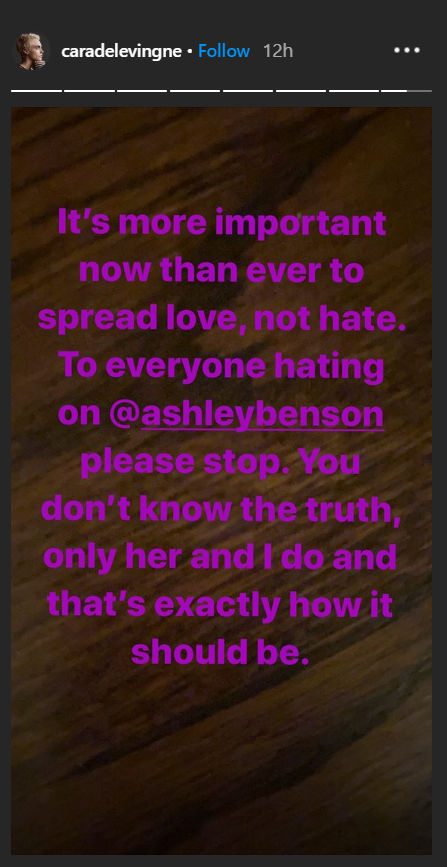 Cara Delevingne and Ashley Benson went public with their relationship in 2019 after almost a year of speculations from the media and fans. Recently, Ashley Benson was pictured with rapper G Eazy. It was also reported that Ashley Benson and G Eazy were pictured kissing each other during their recent outing. Since the reports of Ashley Benson’s rumoured romance with G Eazy started doing the rounds, Ashley Benson is facing flak from netizens.

PEOPLE HAVE PLEDGED SO FAR
LATEST NEWS
View all
10 hours ago
When Miley Cyrus was involved in controversies; see full details
12 hours ago
Review: ‘The Vast of Night’ is a cunning lo-fi sci-fi noir
10 hours ago
Akshay Kumar's songs that will make your work out session epic
12 hours ago
Amy Schumer announces the release of her docuseries 'Expecting Amy'
11 hours ago
Henry Cavill's fans are "psyched" for his return as Superman, demand 'Man of Steel 2'