Popular Welsh actor, Catherine Zeta-Jones recently took to her Instagram handle and posted a sweet romantic picture of herself with her husband, Douglas.

Well-known for essaying the role of a pregnant woman in the movie, Traffic, actor Catherine Zeta-Jones was recently seen in her latest Instagram post where she shared a romantic picture of herself with her husband and one of the popular American actors, Michael Douglas. Let’s take a look at Catherine Zeta-Jones’ Instagram post and see how fans reacted to their adorable photo together.

Catherine Zeta-Jones recently took to her Instagram handle and shared a picture of her lovingly kissing her husband, Michael Douglas. In the picture, they both can be seen around the sea. In the caption, she added a lovable quote by William Shakespeare and dropped a cute kissing symbol in the end. The quote stated that one can express no kinder sign of love than this kind of kiss.

Some of their celebrity friends took to Catherine Zeta-Jones’ photo and thanked her for such a beautiful reminder that true love still exists. All her fans also commented under the post as to how gorgeous they looked together. Some of her other fans also added how perfect and beautiful they looked like a couple. One of the fans also added how there was nothing more rewarding for the soul than a kiss. Take a look at how the fans reacted to Catherine Zeta-Jones’ photos and admired their love for each other. 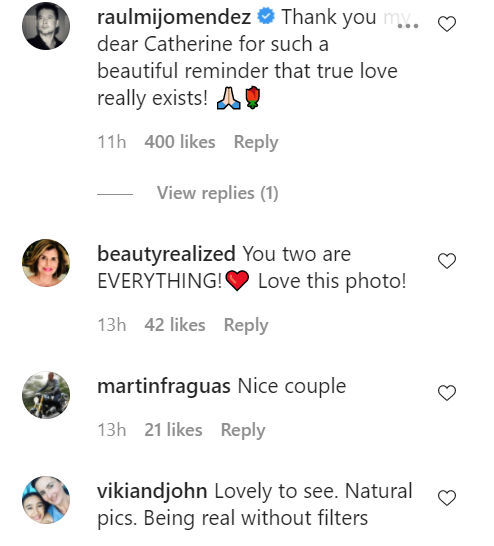 Catherine Zeta-Jones’ Instagram fans also adored one of her other posts through which she wished her husband on their 20th wedding anniversary. In the video, she shared some of the beautiful glimpses of their wedding ceremony along with some other special moments shared by them together. It was overwhelming for their fans to have a look at their fun and romantic moments spent together. In the caption, she stated that 20 years ago, on this day, they were married and added what an amazing magical night it was, and with 7304.85 days and nights on, she loves him now as she did back then. In the end, she thanked her husband, Douglas for all the love and laughter she experienced with her. Many of their fans and popular celebrities sent lovely wishes to the couple on the occasion of their 20th wedding ceremony.