Chris Hemsworth shared his favourite BTS pictures from the sets of his film Extraction, Jason Momoa leaves a sweet comment on the post. Check out the details.

Thor actor Chris Hemsworth took to his Instagram account and shared a few of his favourite BTS pictures from the set of his latest Netflix movie Extraction. Chris Hemsworth was seen performing some jaw-dropping action sequences in his Netflix film Extraction.

A lot of BTS pictures and videos from the set of the film have been revealed. However, when the actor posted his favourite BTS pictures on his social media, Aquaman actor Jason Momoa couldn’t help but compliment the star.

Chris Hemsworth took to his Instagram account and shared the pictures. In the picture, he is seen sporting a khaki coloured trousers with a big gun along with ammunition. His co-star actor Rudhraksh Jaiswal is also seen in a few pictures with him. The pictures are taken by one of his favourite photographers stated Chris Hemsworth on his social media post. 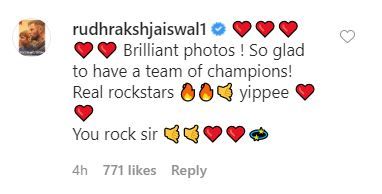 The film, Extraction traces the journey of Chris Hemsworth’s character Tyler Rake, a fearless black market mercenary. Tyler Rake is on a mission to rescue the kidnapped son of an imprisoned international crime lord. The film was shot in various different locations while the film's climactic sequence culminates in a gun battle over the Lat Bua Khao Bridge in Ratchaburi, Thailand.

Meanwhile, Avengers: Endgame co-director Joe Russo has confirmed that he will be working on a sequel to Extraction. Chris Hemsworth and Sam Hargrave are expected to reunite for the new action-adventure.

PEOPLE HAVE PLEDGED SO FAR
LATEST NEWS
View all
4 hours ago
James Mangold discloses important BTS details from the Hugh Jackman film 'Logan'
14 mins ago
Taylor Swift calls out Donald Trump on Twitter, fans make it her most-liked tweet ever
1 hour ago
Will Smith reveals he was 'anxious' about the role of Genie in the 2019 film 'Aladdin'
2 hours ago
Ryan Gosling to star in Universal's 'Wolfman'
19 hours ago
Weinstein raped me in 1994 at age 17, woman says in lawsuit