Chrissy Teigen Embarks On A Backyard Camping Adventure With Family

Chrissy Teigen recently shared a number of photos on her social media from her backyard camping night with John Legend and family. Read the details below.

It’s on. Thank you @yashar for our head lamps and lanterns! pic.twitter.com/Op6m28lP6k

Chrissy Teigen shared a number of photos on both Instagram stories and Twitter, where her family could be seen getting the camping experience int heir backyard itself. Chrissy Teigen, John Legend, Luna and Vilailuck could be seen comfortable in their tent wearing headlamps as they posed adorably in front of the camera. In the second photo, Chrissy Teigen could be seen posing with her daughter Luna as she played around with her toys. Check out the photo below -

Also read: John Legend plays hide and seek with his kids while being homebound amid lockdown

On her Instagram stories, Chrissy Teigen shared a photo of her reading spooky stories for Luna. Chrissy was reading out the book Scary Stories To Tell in the Dark, which she revealed that her mother would read her too when she was younger through an Instagram story video. Chrissy Teigen could be seen wearing the headlamp as she read out the scary story for Luna. Earlier Chrissy Teigen had asked if anyone in LA had a lantern she could use to go for backyard camping on Twitter. 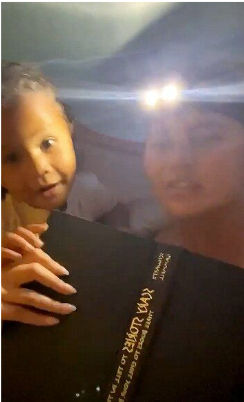 does anyone in the LA area have a not-gas lantern I can borrow? will give a book and a cast iron. tryin to go camping in my backyard tonight and John sent my REI delivery to nyc because he's useless

PEOPLE HAVE PLEDGED SO FAR
LATEST NEWS
View all
17 hours ago
Will Hrithik Roshan pull off Tom Cruise' action in Indian version of 'Mission Impossible'?
18 hours ago
Priyanka Chopra says her accent 'changes with mood' in this throwback interview
1 day ago
'Riverdale' writer apologises to Vanessa Morgan after her 'diversity' comment; Read here
1 day ago
'Observe and Report' shooting locations: All about the film and its filming spots
1 day ago
Ben Affleck's private Instagram account with only three followers leaked on Twitter