Cruz Beckham Posts About Selling His Used-damaged Hoodie For $150,000, Deletes It Later

Cruz Beckham recently posted about selling his used and damaged one of a kind hoodie at $150,000 and deleted it later. Read more to know.

David Beckham and Victoria Beckham’s youngest son Cruz Beckham raised eyebrows recently by putting up his old hoodie on auction. He had posted about selling his one of a kind hoodie online at a hefty amount of $150,000. Cruz Beckham's hoodie was put up for an auction on the Instagram account Sneakerbratz. According to a report by Daily Mail, the auction was opened up at $45,000 with a buy now an option at $150,000. For all the people who are wondering about Cruz Beckham's hoodie, here is everything you need to know about it.

The report added that the hoodie is one of a kind Louis Vuitton x Supreme hoodie. It is used and is also missing some of the hood’s string. The limited-edition piece of luxury clothing was originally gifted to him by his millionaire parents’ designer friend Kim Jones. He was previously a menswear designer at Louis Vuitton. The page listed the item alongside pictures of Cruz Beckham wearing them. The Louis Vuitton Supreme hoodie is in dark and light brown colour which is similar to the iconic pattern by the brand. It is also plastered with large LV logos. At the front and centre of the hoodie, there is a Supreme logo which is also in the matching brown colour. Here is a look at Cruz Beckham’s Louis Vuitton Supreme hoodie.

Supreme x Louis Vuitton “Brown” 1 of 1 hoodie is being sold by @CruzBeckham gifted to him by Kim Jones only the “Red” colourway was released to the public. The highest offer is $45,000, you can buy it now for $150,000 VIA @sneakerbratz pic.twitter.com/oQ66ZNnSU5

After putting up the hoodie on sale, a lot of users were confused about why the hoodie is on sale. The original post has now been deleted which listed the item on sale. Cruz Beckham also took to his Instagram handle and clarified that he is not selling the rare clothing item. Cruz Beckham took to his official Instagram handle and answered a question asked by a user. He was asked, “Are you selling that LV friends and family hoodie ??” to which he responded by saying, “No I’m not” Here is a look at Cruz Beckham's Instagram story. 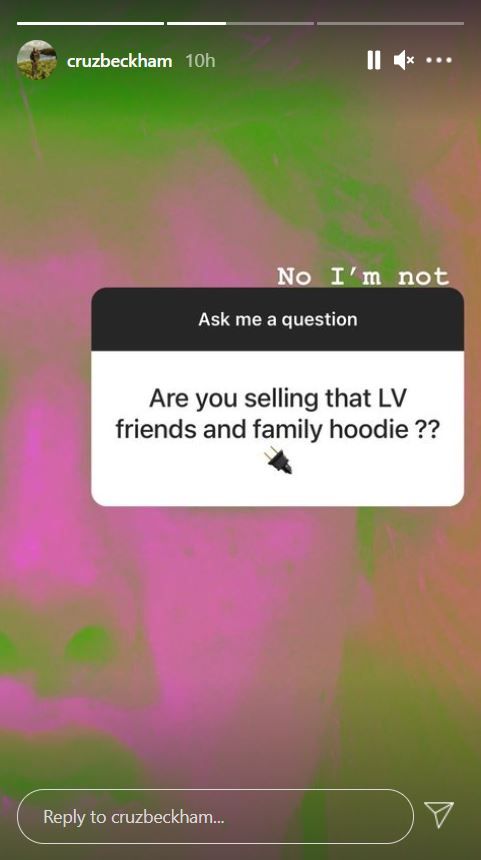 According to a report by idolnetworth.com, Cruz Beckham's net worth is estimated to be at $1 million. The owner of the page Sneakerbratz where the item was put up on sale is owned by Colin Stangel whose Instagram account is followed by Cruz Beckham. This whole incident raised several eyebrows around the world and people were curious to know why he is selling the hoodie which was gifted to him. However, Cruz Beckham put a full stop to all this as the post is now deleted and he also clarified that he is not selling the hoodie.