Demi Lovato who broked her relationship with Austin Wilson last year was reportedly spotted flirting with Max Ehrich online. Does this indicate they are dating?

Demi Lovato made headlines for her new romance in November 2019 with model Austin Wilson. However, the relationship ended in December with a clarification by Demi on her social media. Currently, Demi Lovato is reportedly dating The Young and Restless fame Max Ehrich.

According to media reports, the duo met a few weeks ago prior to the Coronavirus lockdown in Los Angeles. It is speculated by several fans and suggested by several media reports that the two have been self-isolating together in LA.

In recent days, fans noticed Demi Lovato and Max Ehrich flirting and the two posting adorable comments on each other’s social media. Recently, Max Ehrich posted a shirtless picture of him and captioned it, “when u realize u should’ve packed more for your quarantine stay 😅🤦‍♂️ have a blessed Monday filled with health, happiness, safety, joy, love, & laughter <3”.

As soon as Max Ehrich posted the picture, Demi Lovato dropped a flirtatious comment as she says “Fine by me”. 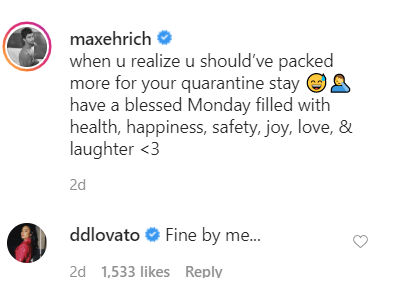 Perhaps another clue of Demi Lovato and Max Ehrich reportedly dating came in when Max Ehrich posted a video of him singing a song. The actor mentioned in his caption “To my <3”.

On his post, Demi Lovato delightfully left a crying eyes emoji and a heart emoji. Several media reports also suggest that Demi Lovato's boyfriend was spotted playing with her dogs in an Instagram story posted by him. According to a report by a media portal, they were spotted together in LA prior to this online flirtation. 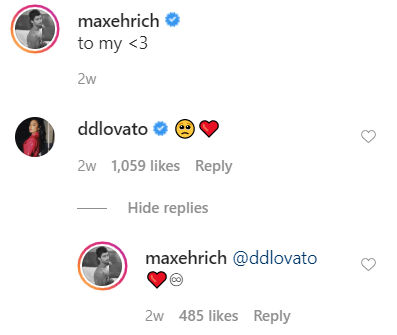