'The Take' On Netflix Streaming Without Subtitles Leaves Netizens Confused

The French film starring Idris Elba and Richard Madden,"The Take" was released on Netflix on Septemeber 16,2020. Find out why are the film's subtitles missing.

The 2016 film Bastille Day, popularly known as The Take in North America, has become one trending tittles on Netflix USA. Helmed by director James Watkins, this action thriller is a Luxembourgian, French and American venture, as it is co-produced by Anonymous Content, Vendôme Pictures, TF1 Films Production and StudioCanal. Many fans turned to watch the film since its release on Netflix on September 16. However, many fans were shocked when there were no subtitles for the French part of the film. Read on to know more.

Read | What Happened To Noah On 'Love Island'? Find Out If He Left The Dating Show

'The Take' on Netflix is streaming with No subtitles

On September 19, a Reddit user took to the social media forum to reveal that The Take on Netflix had embedded subtitles for the French-speaking parts of the film. But, they stopped appearing once the French dialogues started. The Reddit user JCass83 stated that he had missed the most important parts of the film because of the issue with missing subtitles.

The Reddit user further revealed that he had tried turning on English (cc) subtitles, but that did not work either. Upon contacting the Netflix support, the user did not get any reply. The Reddit user was confused whether there was an issue with the subtitles or is the film supposed to be this way. The user stated that the subtitles had become an issue when 1:09:00 hours of the film was still remaining. 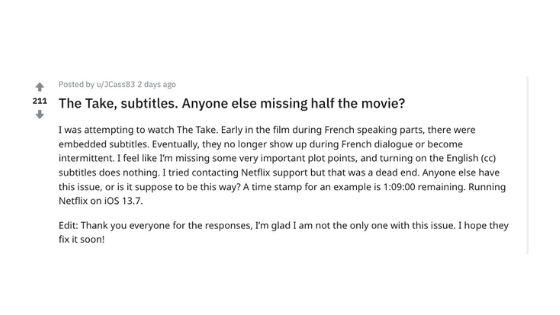 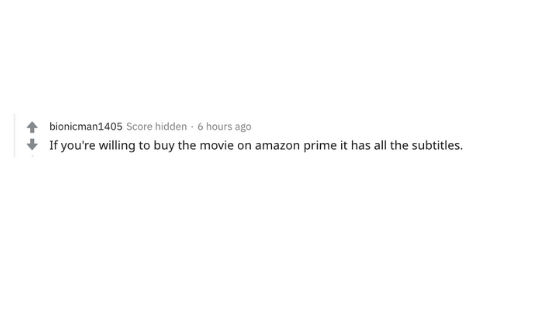 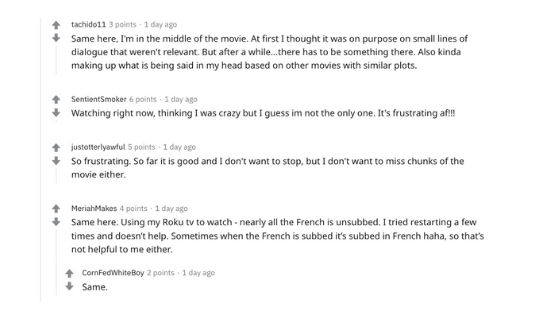 Many Redditers commented under the post claiming that they were facing the same issue. One Reddit user even suggested that if fans purchase The Take on Amazon Prime video, they will be able to watch the films with proper subtitles. Many users also took to Twitter to express their frustration about the same, as The Take was one of the highly anticipated films to be released on Netflix this month.

@netflix @NetflixFilm what's the use of putting "The Take" on Netflix if your not going to sub the french parts. Half the freaking movie is in french with no subtitles. Come onnnn. This is just stupid. pic.twitter.com/GdSl9YzqrC

Has anyone else watched The Take on Netflix? My subtitles are not working & my French is adolescent to keep up. pic.twitter.com/FCZHc5YA7h

Read | What is scary music in 'Ratched' on Netflix? Where is it adapted from?

Why does 'The Take' have no subtitles on Netflix?

So far it appears, that it is a technical glitch or issue due to which the international film lacks proper subtitles on Netflix. Hence, fans can expect the technical issue to be resolved by Netflix at the earliest. Many upset Twitter users have recently added that the subtitles in The Take are only appearing during the English part of the film, not during the French parts when they are actually needed.

Sorry, @netflix The movie The Take with @idriselba looks great but half of it is French and there are no English subtitles except when they’re speaking English. Big Fail.

The Take: About the film

Netflix’s The Take stars film stars Idris Elba, Richard Madden, Charlotte Le Bon, Eriq Ebouaney and José Garcia. The film was originally released on UK and France in 2016. The story of The Take revolves around Michael Mason, a pickpocket living in Paris who steals a bag with a teddy bear in it. Little does Mason realise that the toy contains a timed bomb. Mason inadvertently tosses the bag aside on a busy street and it explodes within a few seconds, killing four people. The CCTV footage reveals Mason's face and the French police tag him as a terrorist threat.

Promo Image Source: The Take (Stills from the trailer)