Jacob Batalon recently took to Instagram to stun fans with his weight loss transformation as he shared a mirror selfie of himself looking incredibly sleek.

Jacob Batalon is quite famous with his role as Ned Leeds in Tom Holland's Spiderman movie series. In the film, the actor essayed the role of a lovable and trustee friend of Peter Parker. Recently, Spider-Man: Homecoming fame Jacob recently took to Instagram to stun fans with his weight loss transformation. The actor shared a mirror selfie of himself looking incredibly sleek and made many jaws drop with this post.

Taking to his Instagram handle, Jacob shared a stunning picture of himself looking completely unrecognisable. In the post, the actor can be seen showing off his body as he sports a brownish open jacket along with black trousers. The actor completed his look with a beanie, a pair of spectacles, and chains around his neck.

Along with the post, the actor also penned a note describing his journey. He wrote, Don’t try to get at me. Imma be vibin all dayðŸ¦¦ðŸ¤™ðŸ½ðŸ˜ðŸðŸ”¥cheese” He also added saying, “by the way, while I appreciate the concern, people can stop telling me to lose weight nowðŸ§ðŸ¼‍â™€ï¸ #kobeyear “. Take a look at his post below.

Don’t try to get at me..imma be vibin all dayðŸ¦¦ðŸ¤™ðŸ½ðŸ˜ðŸðŸ”¥cheeeðŸ˜by the way, while I appreciate the concern, people can stop telling me to lose weight nowðŸ§ðŸ¼‍â™€ï¸ #kobeyear 2ï¸âƒ£4ï¸âƒ£

Seeing this picture, fans went on all-out to comment on all things nice on the post. The post shared by the actor went on to garner several likes and comments from fans. Some of the users were stunned on seeing the post as they could not believe their eyes, while some went on to congratulate the actor for his hard work and dedication.

One of the users wrote, "Damn man I remember when I used to be the fit guy in our group. Lol. Good stuff”. While the other one wrote, “Smashed it! Looking great”. Take a  look at a few comments from fans. 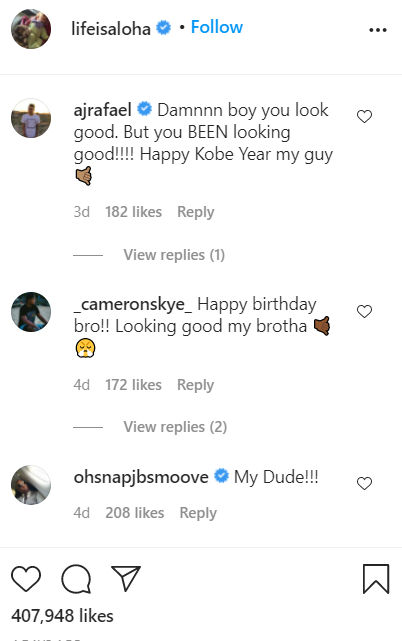 Earlier to this post, the actor went on to share a throwback picture of himself where is seen showing off his previous body. The picture shared by the actor was from 2019, and he can be seen in his previous avatar. In the post, the actor can be seen sporting an orange t-shirt, black joggers. He completed the look with a dark green jacket and accessories. The post also garnered several likes and comments from fans. Take a look at the post below.