Recently, a shocking revelation of a private group on Instagram named 'Bois Locker Room' was brought to light. The screenshots which went viral on the internet suggested that the participants of the group, mostly between 15-17 years, were objectifying girls. One of the most appalling revelations through the 'Bois Locker Room' row were leaked screenshots where school-going kids could be seen discussing and plotting a gangrape.

Ever since this shocking Instagram group has been brought to light, many celebrities have come forward in support of the women who made the information public. Now, actor Jameela Jamil has also extended support to the women in India over the 'Bois Locker Room' row. Check out the post below: 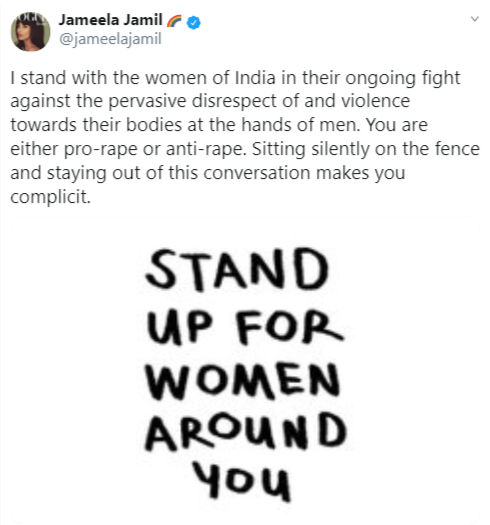 Jameela Jamil wrote that she stands up for women in India who are working to bring such heinous acts to light. The actor also urged people to not stay silent and voice their opinions to make people understand. She also expressed that people who are staying out of the conversation are actually complicit of the actions. Jameela Jamil posted a series of tweets where she talked in details about the 'Bois Locker Room' group on Instagram in detail. Check it out below:

This Bois Locker Room disaster has shone a light on this ongoing rampant misogyny and rape culture in India. Targeting such young girls and speaking about them in such a disgusting/dehumanizing way. We need our MEN (esp actors/politicians.) to step in against this violence NOW.

The work and endangerment of whistleblowing and speaking out must not just fall on the women, as usual. This rot of patriarchy has to be cleared from the inside. We need men to infiltrate the system in ways we can’t, alone, from the outside. Think of the women you love/respect.

Also read: Jacqueline Fernandez's Thriller Flicks You Must Add To Your Watch-list During Quarantine

The 'Bois Locker Room' row on Instagram has evidently brought forward a male-dominated culture that is based upon objectifying women. The screenshots which were made public by some brave girls in South Delhi showcased many horrific details. Whereas, the official Me Too movement social media handle has also shared their thoughts on the incident. Various social media users are calling these school going kids out for their actions. While some internet users are also sharing that the boys have the audacity to act like this and defame women. it is rather also evident that the students who were a part of this Instagram group do not feel any remorse as they quickly came with fake accounts and shared unsolicited photos of women.

Thread: Students who are 16, 17 years old, are casually talking of gang raping girls and women, swapping nudes without the consent of these women on Reddit, with not even a hint of fear of exposure. The dire crisis of rape womxn face, starts with this rape culture #boyslockerroom

Also read: World Laughter Day: 7 Bollywood Actors Who Have Got Their Comic-timing Down Pat!

PEOPLE HAVE PLEDGED SO FAR
LATEST NEWS
View all
1 hour ago
Chernobyl' director Johan Renck in talks to adapt novel 'The Magus'
2 hours ago
George Floyd's death: Kylie Jenner says speaking up is long overdue
4 hours ago
Halsey reveals she is preparing for Bar Exam amid lockdown, says 'Law is fun but hard'
4 hours ago
Nick Jonas' songs to listen to during summer in quarantine including 'Home' & 'Anywhere'
13 mins ago
Here's why the title of 'John Wick' was changed because of Keanu Reeves; Read here