Amid coronavirus lockdown where frenzy fans are disappointed over not being able to watch their favorite stars perform live, the famous boy band, Jonas Brothers have come up with a perfect cure. The boy band along with Amazon Prime Video released the Jonas Brothers concert film, Happiness Continues, on April 24, which features the famous trio and their equally-famous wives.

One of the bandmates, Joe Jonas shared the exciting news on his Instagram page where he shared the poster of the tour where the three brothers can be seen smiling while witnessing the overwhelming response by the audience. While sharing the news, Joe Jonas wrote, "It's out!! Hope you guys love #HappinessContinues as much as we do. Can't wait to see some of you guys on the #JonasWatchParty Zooms later today!! Special shoutout to our director @anthonymandler for all the hard work and love he poured into this project!"

Read: Priyanka Chopra Has Featured In These Songs By Nick Jonas And The Jonas Brothers

Sometime back, the Jonas Brothers dropped the trailer for the concert documentary and going by the gripping video, it will surely bring back the memories of the boy band. The trailer is packed full of concert footage, where viewers can also catch glimpse of Sophie Turner and Priyanka Chopra Jonas accompanying their husbands on the famous tour. Apart from this, the touching words from the brothers about their fans how "we're their boys," in the video is sure to melt your heart.

Among the people who extended their congratulations to the singers for the amazing film, the director of the documentary, Anthony Mandler was the first one to pour in his heart in the comment section and wrote, "You Guys." Completely surprised by the news, other fans of the boy band stormed the comment section with their takes and thanked them for sharing such beautiful news amid the lockdown. One of the fans of the singers wrote that he got emotional after watching the documentary and started crying in between. Another fan of the boy band echoed similar sentiments and expressed that the film is more than amazing and he cried a lot. A third user wrote that it was nice being able to enjoy the concert with a great view and acoustics.

Read: Here's Everything You Need To Know About The Jonas Brothers & Their Talented Wives

Read: Here Is A Check List Of All Nick Jonas Films With The 'Jonas Brothers' 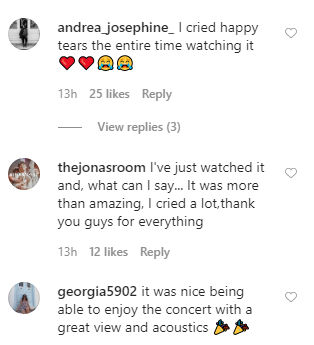 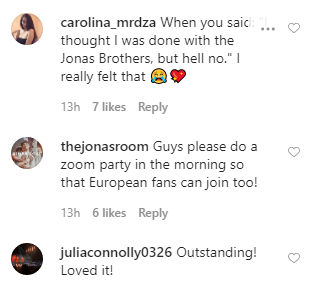 PEOPLE HAVE PLEDGED SO FAR
LATEST NEWS
View all
7 hours ago
Ashley benson and g-eazy spark dating rumors after being spotted together in malibu
9 hours ago
Kendall jenner's self-proclaimed twin brother kirby jenner reveals some sibling secrets
7 hours ago
Jimmy fallon apologises for wearing a blackface in a sketch 20 years ago; netizens divided
7 hours ago
Drake bell takes fans down the memory lane with his new 'wipe it down' challenge
7 hours ago
Sophie turner shows off her baby bump as she strolls on a beach with joe jonas; see here