Justin Bieber And Ellen DeGeneres' Most Memorable Moments Together

Justin Bieber and Ellen DeGeneres have appeared on television several times. Here are the top Justin-Ellen moments that you must check out.

Justin Bieber recently released his new album, titled Changes, on the occasion of Valentines Day 2020, and is being appreciated by fans for the same. He has appeared several times, in the part, on The Ellen DeGeneres Show, to promote his albums. Ellen DeGeneres and Justin Bieber together have a lot of moments that are adorable, hilarious, and heartwarming. Read on to know more about the top Justin-Ellen moments here:

READ | Robert Pattinson And Other Actors Who Played The Role Of A Vampire On-screen; Read

In May 2012, Justin Bieber had just passed out of high school, and due to work commitments, he could not attend his graduation ceremony. Two weeks later, he was seen as a celebrity guest on The Ellen DeGeneres Show, where she held a small informal graduation ceremony for the singer. There were robes and mortarboards, and an audience to cheer the two. DeGeneres gave a cute speech from a podium that read Ellen Academy. She spoke about Bieber’s achievement and congratulated Bieber for his success. It was one of the best and cutest Ellen-Justin moment.

In March of 2015, Bieber was seen on the set of The Ellen DeGeneres Show with Madonna, where the trio was seen playing Never have I Ever. This game spilled a lot of beans and turned out to be quite hilarious. Ellen had some funny things to say, as always, and Bieber managed to pull off his chocolate boy charms successfully. Ellen, on the show, stated that Bieber and Madonna are perfect for each other, to which Madonna replied that she has found her new Boyfriend, subtly referring to Bieber’s song, which had just released.

Justin Bieber has appeared several times on the Ellen DeGeneres Show. The host of the show, Ellen DeGeneres, has an ongoing-gag, where she uses the technique of jump-scares to scare whomsoever she is featuring on the show. But in February of 2015, Ellen DeGeneres and Justin Bieber were seen scaring the audience. The duo hid in the washroom and scared everyone that walked in. Surprisingly, after a brief moment of fear, fans would come back and instantly hug Bieber.

Back in 2015, Justin Bieber released one of his top-selling songs, titled What Do You Mean? For promoting the song, Ellen DeGeneres took to her official Instagram handle and posted a photo of the countdown, as the song was about to release after eight days. It was a very cute moment, and fans of the two flooded the comment section on the Insta post by Ellen. 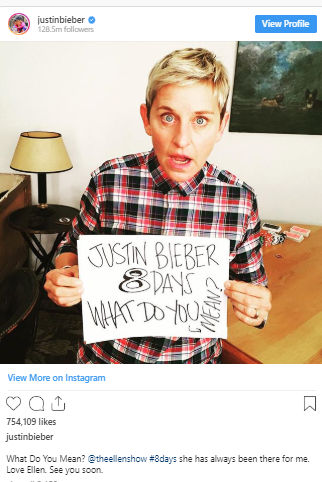