Justin Bieber recently took to his Instagram and shared his clean-shaven look. In the captions of the picture, he wrote ‘Baby Face Bieb’. Know more about it.

It has been five years since Justin Bieber dropped his last album and, since then, his personal life has gone through a lot of changes too. One of the biggest changes in his life was marrying Hailey Baldwin. After his wedding to Hailey, Justin dropped a new album on February 14, 2020, as a tribute to his wife. After this, fans are now speculating that Justin and Hailey are expecting a child, and all of this is making his fans feel more connected to him as he is facing problems and situations that fans his age also go through. But on February 16, 2020, he changed one more thing that will make his fans feel more connected to him. He shaved his moustache and went back to his old look. Take a look at it here.

Justin Bieber has finally ditched his moustache. Ha captioned to picture by writing “I shaved. MUSTASHIO went on holiday, but he will be back in due time”. We can also see captions on the image where Justin has written “Baby face BIEB” in a burgundy text.

He also shared a video of him shaving his "MUSTASHIO" on his Instagram story where he plays The Rolling Stones' iconic track Miss You. In the second video, we can see him shaving the moustache to Kelly Clarkson‘s Since U Been Gone. After this, in the third video, we see him keep the razor as Hit The Road Jack by Ray Charles plays in the background. His wife Hailey Baldwin, who was reportedly not a fan of the moustache, commented on the picture by writing “yeeeeee😍”. 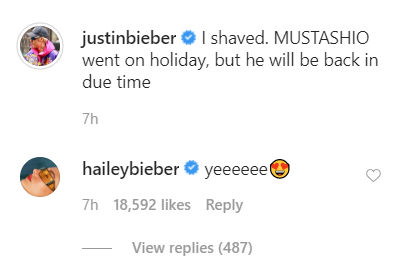 PEOPLE HAVE PLEDGED SO FAR
Kelly Ripa gets emotional as she reveals that she isn't speaking to two of her kids
Chelsea Handler leaves the internet in splits as she turns her bra into a face mask
Chris Evans had rejected the role of Captain America initially, reveals his mom Lisa
Naomi Watts has a meltdown over three broken appliances during self-isolation; watch video
Selena Gomez's co-star Jennifer Stone from Wizards of Waverly Place takes up nurse duties
DO NOT MISS
5 MEN ARRESTED FOR BEATING ENGINEER
ICMR REVISES COVID-19 TESTING
SACHIN PILOT ON COVID-19 FIGHT
DELHI CM ON OPERATION SHIELD
MADAN LAL REJECTS INDIA-PAK SERIES
PRASOON JOSHI ON 'MASAKALI 2.0' ROW