Katy Perry is finally returning as the judge on the singing reality show, American Idol. On Monday, the show started its production once again. Katy Perry shared this update on Instagram in a black and white cow-print costume. While many fans were ecstatic about this news, a single comment on this post is making major headlines.

Katy Perry received a special comment from none other than former Victoria’s Secret model Miranda Kerr. Miranda Kerr commented, “Omg you’re amazing! Love you”. This comment spread like wildfire and fans of both the celebrities were here for it. Take a look at Katy Perry’s Instagram post, Miranda Kerr’s comment, and the subsequent fan reactions to this comment here.

MUTHA MILKS is back to werk @americanidol and it’s ðŸ¼udderlyðŸ¼ ridiculously MOO-ving already! ðŸ„ Not pictured: my pumping breaks ðŸ™ƒ (shout out to @csiriano for the incredible custom costume ðŸ’…ðŸ»âœ¨) 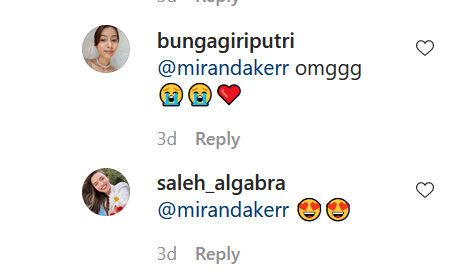 This comment caused a major stir because both Katy Perry and Miranda Kerr have a common connection between each other. Miranda Kerr and Orlando Bloom were married. But unfortunately, the two got divorced in 2013. Miranda and Orlando share the joint custody of their nine-year-old son Flynn.

After Miranda Kerr and Orlando Bloom’s split, they both started seeing other people. Orlando and Katy Perry started dating in 2016. But they split after a year. Although this split did not last long and they reunited in 2018. In 2019, Orlando and Katy took a further in their relationship and got engaged. On August 26, 2020, the couple welcomed their first daughter Daisy.

#Repost @unicef ãƒ»ãƒ»ãƒ» Welcome to the world, Daisy Dove Bloom! We are honoured to introduce Goodwill Ambassadors @KatyPerry and @OrlandoBloom’s new bundle of joy.â € â € “We are floating with love and wonder from the safe and healthy arrival of our daughter,” Katy and Orlando told us.â € â € “But we know we’re the lucky ones and not everyone can have a birthing experience as peaceful as ours was. Communities around the world are still experiencing a shortage of healthcare workers and every eleven seconds a pregnant woman or newborn dies, mostly from preventable causes. Since COVID-19 many more newborn lives are at risk because of the increased lack of access to water, soap, vaccines and medicines that prevent diseases. As parents to a newborn, this breaks our hearts, as we empathize with struggling parents now more than ever.â € â € “As UNICEF Goodwill Ambassadors, we know UNICEF is there, on the ground, doing whatever it takes to make sure every expecting mother has access to a trained health worker and access to quality healthcare. In celebration of the heart we know our daughter already has, we have set up a donation page to celebrate DDB’s arrival. By supporting them, you are supporting a safe start to life and reimagining a healthier world for every child. We hope your ♥ï¸ can bloom with generosity.â € â € Gratefully-â € â € Katy & Orlando.”â € â € Please tap the link in our bio to support the most precious gift: a healthy child.

In a recent interview with Ellen DeGeneres on The Ellen DeGeneres Show, Orlando Bloom talked about his daughter Daisy. In the interview, he revealed that Daisy is a mix of him and his fiancé Katy Perry. He also added that she shares Perry’s famous blue eyes. Furthermore, Orlando Bloom also revealed that he chants a Buddhist mantra in Daisy’s ears every morning to soothe her.